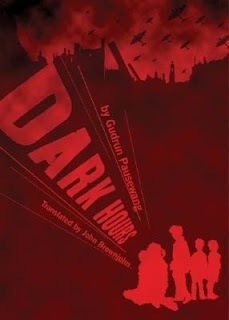 This is the final week of the German Literature Month challenge and participants can read whatever they like.  I decided to read a novel by Gudrun Pausewang because I found the last book I read by her, Traitor, to be such a well developed taut story that I was on the edge of my seat right up to the end.  What an excellent writer she is, though not everyone’s cup of tea.

Dark Hours begins just at the end of World War II and the Russian Army is advancing west rather quickly.  Germans living in Silesia (now Poland) are ordered to evacuate and Gisel, 15 (but about to be 16 in two days), along with her granny, her pregnant mother and her brothers, Erwin, 12, Harold, 6, and Rolfi, 18 months, board a train hoping to travel to Dresden and safety before the Russians catch up to them.

Along the way, Gisel’s mother goes into labor and has to be taken off the train.  The family continues on, but must change trains along the way.  At the station, Granny goes to find out which train to take, while Gisel watches the luggage and the kids.  Suddenly, an air raid siren goes off and the children are carried along with the panicking crowd to find shelter.   Then Erwin gets separated from them.  Gisel leaves Harold alone with the food bag and tells him not to move, but once she finds Erwin, Harold has disappeared, along with their food.  And in the meantime, a 7 year old girl named Lotte attaches herself to Gisel.

Air raid wardens insist they find shelter.  Once the raid is over, all the kids want to go to the bathroom, and they head that way.  Turns out, Harold was in there all the time, with the bag of food he had to rescue from a thief.  Finally, together again in the now empty ladies room, the air raid sirens go off again.  This time the train station takes a direct hit, and the kids can hear that the shelter has been destroyed, but the rubble is blocking the ladies room exit and they are stuck there with no lights, no water and no heat.

Then they discover that there is a severely wounded soldier in the men's room next to them, whom they can speak with through a small pipe.  This man, Herr Rockel, is able to give Gisel advice on how to survive until they are found and seems to draw some comfort in hearing the noise they make.

Buried under mounts of rubble, knowing that they are literally surrounded by death, they don’t know if they will ever be found, but must carry on with that hope.  How they do that makes up the bulk of the story, although the reader knows from the start that at least Gisel survives, since the story is framed by a letter she is writing to her granddaughter for her 16th birthday.

Dark Hours is a poignant, compelling coming of age novel, as well as a taut, psychological story, though I didn’t find it as much of a nail-biter as I did Traitor.  Interestingly, it almost seems that although Gisel is confined to a small space in which her movements are limited, her thoughts are suddenly free to go wherever they want, not something that was allowed in Hitler's Germany.  So, aside from thinking about what they must do next to survive, she begins to consider how her own family went from being absolute supporters of the regime to becoming completely disillusioned.  Then, in the midst of the death and destruction, she suddenly realizes the futility of war.  The world is falling apart because of one man and for what?  And of course, there is the analogy here of the firebombing of Dresden that completely destroyed this beautiful, historic city, considered by many to be overkill, simultaneous to Gisel’s experience.

Gudrun Pausewang grew up in Germany, the eldest of six children. She was about Gisel’s age during the war and also had to flee her village because of the advancing Russians.   One can’t help but wonder how much of Dark Hours is autobiographical and how much imagination. Pausewang makes no bones about her anti-war stance.

Pausewang is one of my favorite contemporary German writers, and while Dark Hours wasn’t my favorite novel by her, I certainly consider it an important book and recommend it.