From the Archives # 16: Dave Dawson at Dunkirk by Robert Sydney Bowen

"I’m reading Dave Dawson at Singapore.
I’m most of the way done.
Thanks for sending it.”
Eddie’s War
pg 95 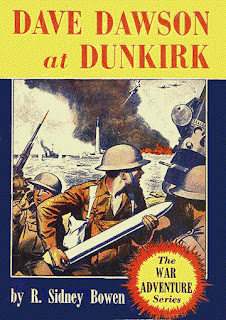 I laughed when I read these words a few weeks ago because before I read Eddie’s War I had read another Dave Dawson book and was, by then, quite familiar with Robert Sydney Bowen’s World War II series for boys written during World War II.

Dave Dawson at Dunkirk is the first book in the series and begins with 17 year old Dave waking upon May 10, 1940 in a hotel in Paris, thinking about how lucky he is to be in war torn Europe with his dad and about the day’s planned trip to the “impenetrable” Maginot Line.  But when he goes to find his dad, Dave discovers he is missing.  Dave is soon informed that his dad has gone to England on government business because Hitler’s forces had just invaded France.  A Lieutenant in the French Army is to drive Dave north to Calais, where he is supposed to catch a boat to Dover, England and safety.

But the road out of Paris is crowded with French refugees trying to escape the advancing Nazis and the going is slow.  Suddenly, a swarm of Nazi planes start shooting at the people on the road, and next thing Dave knows, he is waking up under a tree and it is night.  As he tries to puzzle things out, Dave sees two headlights and runs out to the center of the road to flag down the approaching vehicle.

The vehicle is an ambulance, driving by a member of the British Volunteer Ambulance Service named Freddy Farmer, 16.  Freddy offers Dave a ride and naturally the two boys become fast friends.  But they don’t get very far when they are arrested as spies by the Germans.  Seems they had unknowingly crossed from France into a Nazi occupied area of Belgium.    Their captors continuously interrogate, but when they offer no information, the Colonel in charge has them brought to his office where threatens to have them shot unless they give him useful information.  Fortuitously, Dave and Freddy see a military map pull of different colored pins in the Colonel’s office and think it might be important to the Allies.

This spurs Dave to finally figure out how to escape.  They manage to pull of a very convoluted getaway, getting far enough away to be able to sleep in a wood.  But when they awake, they discover that a farmhouse in the area is full of Nazis.  While they are watching, a small plane lands in the farm’s fields.  This give Dave the idea to escape by stealing the plane, and he conveniently has already had flying lessons.  Once again, Dave and Freddy manage to foil the Nazis as they make off with the plane.

But when the Belgian solders see the Swastika on the plane’s wings, they start shooting at it.  Dave manages to crash land the plane and the soldiers rush out to arrest them.  The Belgians, after hearing their story, decide Dave and Freddy's arrest by the Germans has indeed yielded valuable information and they all leave for the Belgian army’s new headquarters, to tell them what they know.  Naturally, they don’t get far when they hit Nazi land mines in the road.

Eight days later, Dave wakes up in a British military hospital in Lille, France.  At first, no one believes their story, but their escape had already become the stuff of legend and they were finally recognized.  The Belgian High Command had notified the British High Command about the boys and the chief of British Staff, General Caldwell, comes to visit and hear their important information.

The boys are still at the military hospital when the Belgians surrender to the Germans and they learn that the patients at Lille must be evacuated as the German advance towards them.  Dave and Freddy are recruited to drive an ambulance to a base hospital at St. Omer, but on the road they are redirected.  The evacuated injured soldiers are to be taken by rail to Dunkirk where they will be evacuated again.  After they load the wounded onto the train, Dave and Freddy are about to board, when Germans planes could be heard.  The train pulls out, leaving the boys and several hundred other behind.

Dave and Freddy find a cave and they both fall asleep, despite the explosions from the German bombs.  The next morning they discover the train tracks are destroyed, but decide to follow what is left of them in order to get to Dunkirk.

As they approach Dunkirk, they are stopp by a British soldier, but once again, their reputation has preceded them and he knows exactly who they are.  The small boat rescue was underway, and as they wait their turn to board a boat, the boys notice as motorboat drifting after being hit by German planes.  They quickly swim out to it and found the boat OK, but the owner is dead.  Just as they are about to collect men from the beach, a U-Boat torpedoes a ship full of soldiers and they turn the motorboat in that direction to save some of them from that burning, sinking ship.  And of all people, it is General Caldwell they pull out of the water.  He tells them that the last of the British Army was at that moment being picked up and it was time to head back to England.

Robert Sidney Bowen had some experience with war time flying.  He was actually a World War I flying ace, having shot down 8 enemy planes.  This and an incredible imagination certainly qualified him for writing the Dave Dawson series, as well as the Red Randall series, begun in 1944.  Altogether, Dave Dawson and Freddy Farmer share 15 war time adventures in both Europe and the Pacific, though Freddy never gets his name in any of the titles, consigning him to mere sidekick status.

Dave Dawson at Dunkirk is neither realistic (what mother would allow her 17 year old son to go to France at that time?) nor plausible, but readers didn’t demand that, they wanted adventure and they got adventure.   My personal favorite thing about this book was Bowen's use the device of unconsciousness in order not to have to explain how some things happen.  How did Dave end up in Belgium and how did Dave and Freddy end up in the British Military hospital?  Your guess is as good as mine.  And how did they survive their harrowingly dangerous adventures?  Lady Luck!  Apparently these conveniences did not bother their fans, who loved reading their adventures.

This book is recommended for readers 10 and up
This book was downloaded free from Project Gutenberg and you can download and read it, too.
Posted by Alex Baugh at 8:37 AM

Email ThisBlogThis!Share to TwitterShare to FacebookShare to Pinterest
Labels: From the Archives, YA