Winter in Wartime by Jan Terlouw 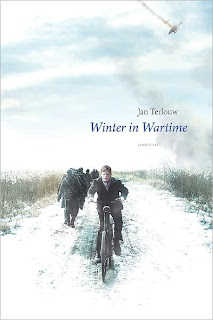 It is the last winter of World War 2 and the people in Holland are cold and hungry. Their country has been devastated by the occupying German forces. For Michiel Van Beusekom, the war is about to get much more dangerous, and now, at 15, he feels ready to actively work against the Germans.

And it looks liked his chance quickly arrives in the form of his neighbor and friend Dirk Knopper. Michiel knows Dirk is in the Dutch Resistance, and Dirk knows he can trust Michiel. On evening, Dirk tells him there is going to be a raid on a distribution center in order to obtain ration cards and identify papers for people in hiding. He give Michiel a letter and tells him to make sure he give it to another Bertus Van Gelder, another friend and resistance member, if anything goes wrong.

And everything does go wrong. Dirk is arrested with his two companions, as is Bertus Van Gelder. Puzzled at how the Gestapo knew what was going on and who was involved, Michiel doesn’t know what to do with the letter. He finally decides reads the letter himself. Inside are instructions for finding a hiding place in the woods, in which Dirk has hidden an injured British pilot named Jack.

Michiel finds the hideout and Jack, and promises to bring him food every other day. But Jack’s injuries are not healing well, so Michiel is forced to let his older sister Erica, a nurse, in on his secret. He didn’t want to expose Erica to any danger, especially since so many things were going wrong lately.

Meanwhile, when the body of a dead German soldier is discovered, it is assumed by the Gestapo that he was killed by one of the Dutch residents of the village of Vlank. They demand that the person come forward and confess, but when that doesn’t happen, they change tactics. They round up a group of 10 random people, including Michiel’s father, the Mayor of Vlank, and announce that they would be publicly hung if the culprit didn’t come forward. When there was still no confession of guilt from anyone, five people are released, but five are shot to death, including Michiel’s father.

While Winter in Wartime is essentially a coming of age story, it is also a suspenseful and tense story that realistically depicts the dangers many people in Nazi occupied countries faced. Although Michiel willingly takes of the resistance activities of a grown man, he does have his moments of question. For example, his plan for sneaking an elderly Jewish man and his son past the Germans guarding a river crossing works brilliantly, until innocent victims are made to pay the price. And yet what becomes clear in this story is also the willingness of people to risk their lives to help those who are even more oppressed and despised, no matter what.

The book was originally published in Dutch in 1972, and issued in translation in 1976. In 2008, an apparently not very good movie (I haven’t seen it yet) was made, also in Dutch, with English subtitles. And in early 2011, the novel Winter in Wartime was re-released. Oddly enough, I cannot find the translators name. The translation is a little awkward and a little abrupt at times, but it certainly does not diminish the quality and impact of this book.

The author, Jan Terkouw, was born in 1931, son of a clergyman. I am sure that many of his experiences in the war are included in Winter in Wartime. The vivid impressive portrayal of the cold, bleak winter weather, the constant stream of people wandering the roads in search of food to bring back to their children, and the difficulty of riding in it on a bicycle with wooden wheels could only come from experience. I was also impressed that I was surprised by the ending, which I never would have suspected.

This book is recommended for readers age 12 and up
The book was a received as an E-ARC from NetGalley.com.

This is book number 17 of my Forgotten Treasures Challenge hosted by Retroreduxs Reviews
Posted by Alex Baugh at 6:44 AM