At the Firefly Gate by Linda Newbery 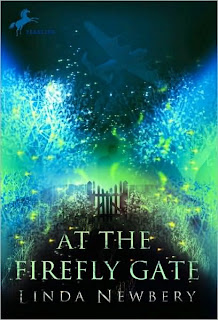 At the Firefly Gate is a simple romantic ghost story that seamlessly connects past and present, and age and youth together.

Henry, 11, is not happy when his parents move from London to the village of Crickford St. Thomas. His first night there, he sees a man standing at the garden gate, smoking a cigarette and with a cloud of fireflies flying around him, appearing to look straight at Henry.

The next day Henry and his parents are invited to tea by their neighbor Pat, whose daughter Grace is a little older than Henry. Also living there is Dottie, Pat’s elderly aunt. Henry and Dottie immediately feel the strangest connection to each other, despite their age difference.

That night, Henry dreams that he is at a mobile café, buying doughnuts and coffee, helped by a pretty girl who was flirting with him. And he knew the guy with him was his best friend, Rusty Dobbs. Yet, nothing about the dream made sense to him and, despite its vividness it slips away from him when he wakes up.

Henry begins to settle into his new surroundings. He is often invited to Pat’s home for tea and becomes friendlier with Dottie, bonding with her over games of Scrabble. All that spoils this is Grace telling him that Dottie is dying.

Meanwhile, Henry meets and becomes friends with Simon, who he will be going to school with. One hot Sunday, Henry and Simon go over the stream to cool off. They get lost along the way and discover an old, long abandoned airfield, which Simon recognizes as the one where his great-granddad was a pilot during World War II. He tells Henry the story about how his great granddad was in sick bay the night his entire crew went on a mission over Germany and never came back. Henry is stunned to learn that Simon’s great granddad’s name is Rusty Dobbs.

The past and present continue to overlap in Henry’s life, even as carves out a spot for himself in Crickford, making new friends and adjusting to life there. Dottie finally clarifies the identity of the man, explaining that he was also named Henry, a navigator in the RAF and best friends with Rusty Dobbs. He was also the love of her life and, after he didn’t return from the mission that saved Rusty’s life, she never was interested in marrying anyone else.

Newbery’s well developed Henry is a sweet, sensitive character, a rather ordinary boy who suddenly has this extraordinary experience. As pieces to the puzzle of the past present themselves, Henry increasingly becomes more determined to figure it all out. Dottie’s mind is still that of a feisty girl, even as she is physically limited simply by her age. She seems to bring out a confidence in Henry that wasn’t apparent before, acting as a catalyst for Henry’s ‘coming of age.’ Even sullen, angry Grace is well-drawn in her desire to become an RAF pilot against all the odds.

Though I thought the story started out rather slowly and with just a touch of confusion, in the end I enjoyed it very much. I think Linda Newbery has written a very nice refreshing book about friendship between generations that is unusual in books for young readers, where so often these age groups are at odds with each other instead.

The Book Cover: The cover of a book matters and can often influence a reader's decision about reading it.  In this case I think the cover is quite lovely.  The trouble is that on the book I read the details are so dark are hard to make out.  I made the picture of the cover a little brighter with some finagling so that the details are somewhat clearer.  Illustrators work hard on covers and they should be appreciated.  The artwork for At the Firefly Gate was done by Jess Meserve.

This book is recommended for readers age 9-12.
This book was borrowed from the Children’s Center at 42nd Street of the NYPL