When the United States dropped two atomic bombs on the Japanese cities of Hiroshima and Nagasaki in 1945, it may have brought an end to World War II, but it also ushered in the Cold War and the nuclear arms race. Suddenly, countries that had been allies during the war became enemies and it didn't take long for these enemies to convince themselves that atomic bombs (atomic fission bombs) weren’t enough, so they began working on the more powerful H- bombs (hydrogen fusion bombs.) And all across the world, as nuclear panic increased, students were required to practice “duck and cover” drills, as though your school desk would save you from radioactive fallout (little known, but interesting fact: in NYC students were issued dog tags because of the nuclear threat, in case someone survived and could identify them.  I don’t know about the rest of the country.) 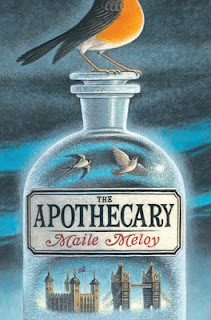 All of this is brought to the fore in The Apothecary by Maile Meloy, her soon to be released novel based on the Cold War and Soviet testing of an H-bomb. The story begins in 1952, when Janie Scott, 14, is told by her parents that they must move from sunny warm Los Angeles, California to London, England. The reason is so that her parents, who write for television, can avoid being questioned by the House Un-American Activities Committee (HUAC) and incriminating some of their friends who are suspected Communists.

The move is immediate, before passports can be confiscated by the US government and the next thing she knows, Janie has landed in post war austerity London, in a flat with no hot water, no heat and not enough blankets. She and her father immediately go over to the apothecary to buy some hot water bottles. While there, the apothecary, Mr. Burrows, gives Janie an herb mixture for homesickness.  It seems to help, but not nearly as much as the ensuing adventure.
The next day at school, during a “duck and cover” drill, Janie is immediately drawn to the one boy who refuses to get under the lunchroom table. On her way home, she sees this boy in the apothecary’s shop, arguing with the kindly Mr. Burrows. The boy turns out to be Benjamin Burrows, his son. Benjamin and Janie meet on the Underground that afternoon, when he notices her following him. The two become immediate friends and, their shared adventure begins when Benjamin’s father is kidnapped, leaving his son with the responsibility of protecting a book called the Pharmacopoeia, a collection of magical potions collected and handed down for centuries by each generation of the Burrows family. And there is no shortage of shady characters that seem trustworthy but who really just want to get their hands on the Pharmacopoeia, and there is no shortage of shady characters who might just be the very people that Benjamin and Janie need trust – but sometimes it is hard for them to tell the difference.
Along the way, Benjamin and Janie meet Pip, a London street urchin who knows how to pick a lock, how to slip away from authorities and how to escape Soviet spies in feats of daring do. The three of them embark on a shared adventure trying to stop the Soviets from testing an H-bomb on an island near northern Norway, called Nova Zembla** and that is somehow tied to the Pharmacopoeia.
The Apothecary is Maile Meloy’s first novel for young readers and, although the Cold War, the nuclear arms race and HUAC may not be things these readers are familiar with yet, there is enough explanation by Janie, the narrator, to move the story along without confusion. Still, a little glossary at the back wouldn’t have been a bad thing.
At the beginning of the book, there is a note to the reader from Janie, dated 2011, who now feels that the events she is about to describe needs to be told now. This makes it a timely novel. Once more, we have been reminded of the danger of all things nuclear with the terrible meltdown of Japan’s nuclear reactors after the terrible earthquakes that struck that country in March 2011, though The Apothecary was probably finished before that.
It is interesting that the now 73 year old Janie relates the events of 1952 in the voice of a 14 year of girl, based on a diary she kept at the time.  I think this makes the novel more readable and appealing to young readers, moving the story along at a good clip and holding the reader’s attention. It certainly held mine, I read in one day because I couldn’t pull myself away.
This was a fun book to read.  The fall of Communism in the Soviet Union in 1991 essentially brought an end to all those great spy stories that came out of the Cold War.  Now, we have a new take on that for a new generation of readers and, though maybe not as sophisticated as, say, a James Bond novel, this definitely has opened up a new area for kids books and it works.  The Apothecary will be released in October 2011 and I highly recommend this novel. It is both entertaining and informative.
This novel is recommended for readers age 10-14.
This book was acquired as an advance galley at the BookExpoAmerica 2011.

** The Soviet Union did test a 58 megaton thermonuclear bomb on an island called Novaya Zemlya, just north of Norway, in 1961. Something really scary – more than 2,000 nuclear tests were carried out between 1945 and 1998 worldwide. And if you have detected a bit of an anti-nuclear stance on my part, your instincts are correct.
Posted by Alex Baugh at 10:44 AM