Back Home by Michelle Magorian 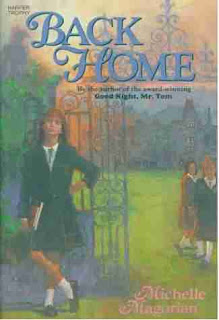 Michelle Magorian is probably best known for her excellent book Goodnight, Mr. Tom, but she also wrote several other World War II novels for adolescent readers. One of those other books is Back Home.

It begins in the summer of 1945. The war is over and 12 year old Virginia Dickinson is returning to England. Virginia had been a scared, timid 7 year old when she was evacuated to an American family in Connecticut. Five years have passed and she is confident 12 year old who now goes by the name Rusty, the nickname her American family gave her because of her red hair. Rusty isn’t very happy about her return. She barely knows her own mother, who is now a talented mechanic with the Women’s Voluntary Service (WVS.) She has a four year old brother Charlie that she has never met and who dislikes Rusty from the beginning. And, she has acquired an American accent, which is greeted with disdain and she is constantly told that she must lose it.

Rusty is temporarily taken to Devon, where her mother and brother have been living with an elderly woman named Beatie. There she meets Beth Hatherly, a girl whose own family seems to resemble the rather bohemian American family Rusty stayed with. She is just beginning to enjoy herself in Devon, when she, her mother and brother move back to her grandmother’s house in London. For Rusty, the move is again temporary, she has been enrolled in a girls’ boarding school, Benwood House, in part to become re-anglicized and hopefully to help her lose her accent.

Rusty’s paternal grandmother is strict, critical and condescending. She intensely dislikes Rusty’s accent, her confidence and her behavior. She also feels Charlie is too coddled by her daughter-in-law and needs to learn to behave like a big boy.

But, if living in her grandmother’s felt like hell on earth, boarding school is worse. Benwood House is definitely not the Chalet School. It is cold, unfriendly, condescending and highly critical of Rusty’s American experience and, of course, the ‘despicable’ accent. Everything Rusty does seems to result in a mark against her and her house, which has the unfortunate name Butt House.

One day, on a trip into town, Rusty overhears some boys calling one member of their group Yank, and she begins talking to him, not realizing that speaking to boys is against the rules. For this infraction, Rusty receives a discipline mark and is called up in front of the whole school and publicly humiliated. The next day she receives the sad news that Beatie has died. Feeling sad and alone, that night, Rusty discovers that she can climb down some scaffolding outside her window, and escape into the woods surrounding the school, feeling free for the first time since arriving in England. She manages to get a note to Yank on her next visit to town, telling him where and when to meet her that night.

The boy, Lance, shows up and they continue to meet at night, exploring and talking. Eventually, they find a bombed out house and Rusty begins to decorate it with the carpentry, painting and stenciling skills she learned in the US. Gradually, however, Lance begins to be accepted by the boys in his school, while things only get worse for Rusty, especially after her father returns home from the army.

It is clear that Rusty’s parents have grown apart during the five years of war. Her mother has become quite independent and refuses to give that up even though she is expected to by both her husband and his mother. Rusty, who has been coming home on weekends, is told by him that she will remain in school from now on. This is unbearable and when Rusty returns to school after Christmas vacation, she decides to run away.

Back Home is not just a war story; it is also a classic misfit come of age story. The level of bullying and intolerance directed at Rusty was, well, almost intolerable as a reader. The girls at school seemed to think she had it easy in the states, while they were left to live through the war in a much more up close and personal way; others resented her open, friendly American ways, and her more colorful, stylish American clothing. This theme of bullying and intolerance is still relevant in today’s world, especially given the fact that there seems to be, probably not in increase in bullying, but rather a crueler, more public presence of it, thanks to social media.

Her mother wanted Rusty to be the same little girl she was before she was evacuated. Her father and grandmother expected Rusty to conform to their idea of a proper English young lady and cast off her five years in the US as though they were nothing more than worn out old socks. Rusty and her mother have to learn to accept that they have changed and to be true to themselves, not what others wanted them to be.

But can a leopard change its spots? Maybe, maybe not.

I also thought Back Home was a very good example of an aspect of evacuation that, really, I haven’t run into before and I wonder how many kids returned home to find the same kind of difficulties Rusty faced.

As always, Magorian has crafted a well written story and one that I would highly recommend. It is by no means the tear jerker that Goodnight Mr. Tom is, but that doesn’t make it any less compelling.

This novel is recommended for readers age 11 and up.
This book was borrowed from the Juvenile Collection at the Hunter College Library.