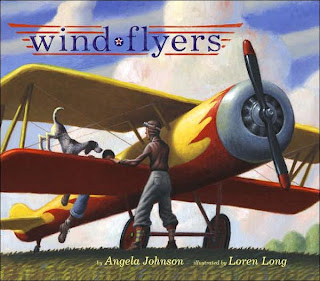 Today we honor him and his dream.

Wing Flyers is the story of another man who also had a dream. His dream was to fly and his story is told by his young and very proud nephew, who now shares his love of flying. It is interesting that we never learn the names of uncle and nephew, making it feel like a collective honor for all the men who were part of the original Tuskegee Airmen.

His uncle had wanted to fly from the time he was a little boy. He tried to fly at the age of 7 by jumping off the barn and flapping his arms like a bird.

At 11, he paid 75¢ to a barnstormer for a ride. Eventually, his uncle became a Tuskegee Airmen. In 1941, the US Air Force created the 99th Pursuit Squadron. This was their first squadron made up entirely of African-America men. In 1942, the 332nd Fighter Group was formed (three squadrons form a group.) Training these men t become pilots took place in Tuskegee, Alabama, where everything had to be built from scratch or brought in because segregation was still in effect in the south.

This is a beautiful book. There is minimal text, yet so much is conveyed. Much of that is in conjunction with the outstanding artwork by Loren Long. It is also an excellent book to use as a springboard for introducing younger readers to the Tuskegee Airmen and their outstanding history.

The story of the Wind Flyers is proof that dreams can come true. 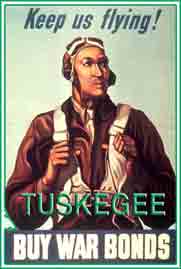