A Boy at War: a Novel of Pearl Harbor by Harry Mazer 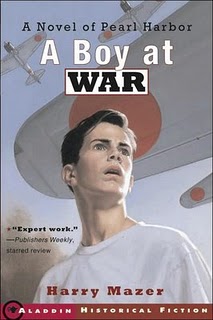 Today is the 69th anniversary of Pearl Harbor day, the day that the Japanese empire attacked the American base at Pearl Harbor, on the island of Oahu, Hawaii and American officially entered World War II. In his speech, President Roosevelt called the attack a “…date which will live in infamy.” For high school student Adam Pelko, it was a day that started like any other and a day that ended like no other.

Adam has moved around his entire life because his father is a lieutenant in the navy, and had recently been transferred to the USS Arizona at Pearl Harbor. It is the first time Adam has been able to go to a regular high school, not a base school and once again, he must make new friends. The two friends he makes are Davi Mori, a Japanese-American boy and Martin Kahahawai, a Hawaiian. However, Adam’s father doesn’t want him to be friends with a Japanese kid since war with Japan is imminent. He reminds Adam that what they do, including who their friends are, reflects not only on them as a military family, but also on the United States Navy. His father firmly believes that Japanese loyalties would not be towards America, and that even Japanese-Americans can’t be trusted if war comes.

But Adam has already made a date to go fishing with Davi on Sunday. Saturday evening his father is called back to the Arizona until Sunday afternoon to cover for the duty officer, who had a family emergency. With his father gone, Adam decides to meet Davi and give him some excuse about not being able to go fishing, but when Martin shows up too, Adam loses his nerve. The boys ride their bikes over to the naval base at Pearl Harbor, slip under a fence, find a rowboat and take it out into the harbor to fish.

They stop rowing within sight of the battleships docked around Ford Island in the harbor. Before they even have a chance to start fishing, they hear the whine of planes. At first, the boys don’t think the planes and explosions are real, that maybe they are for a movie or just a mistake, even after a hot blast batters them. But as more and more bombs fall, Adam realizes that it is a real attack and the planes are Japanese. And when he sees Davi waving his arms and cheering, Adam suddenly begins to suspect that his father was right about not trusting the Japanese:


Why was Davi cheering? What was he doing? Signaling them? Yes, signaling them! He was Japanese. Japanese first! Who had said to come to Pearl Harbor to “fish”? Who had “found” the boat? Who had gotten them out here? “Dirty Jap!” Adam dragged Davi down. He wanted to get him. Kill him. Drown him. (pg44)

Martin breaks up the fight and the boys start rowing towards shore, but when Adam looks over towards his dad’s ship, he sees the USS Arizona bounce in the air, split apart, start burning and finally sink (it sank in 9 minutes.)

Almost immediately a plane flies over the rowboat and starts shooting at them. The boys are blown out of the boat, and Martin is badly injured with a long splinter of wood through his chest. Davi and Adam manage to get him back to shore and into a Red Cross car, but not before a soldier attacks Davi with the butt of his gun, yelling "I got a Jap!" (pg 50)  With Davi and Martin in the car along with wounded soldiers, Adam rides on the running board, holding on to the center post of the car, but is thrown from it when the car swerves to avoid going into the harbor.

Adam finds himself alone, returns to the rowboat and is mistaken for a sailor by an officer who demands he be rowed out to the USS West Virginia.  Adam is recruited to help carry ammunition to the guns on the West Virginia, but soon flees the ship and begins helping to pull wounded men from the water and bring them to shore. As one point, he is even issued a rifle. For the rest of the day, Adam remains in the Pearl Harbor area, helping and trying to find any information about his father, hoping he was not on his ship at the time of the attack for some reason. Finally, late in the day, Adam decides to sneak away from the base and return home. But his day and his story aren’t over yet.

A Boy at War is a small book, but a powerful narrative. It is the story of a boy who becomes a man in one single day, but a man who can think for himself. At the heart of the story is the theme of racism, or what one reviewer call racial profiling. When the Japanese attacked and the battle cry “Remember Pearl Harbor” was sounded, it became hard for many Americans to differentiate between the Japanese of the Empire and the Japanese who were loyal to the United States. According to Mazer’s Author Notes, in Lt. Pelko talk with his son he was stating the Navy’s position on the Japanese living in Hawaii, believing they would assist their ‘homeland’ and work to sabotage the war effort. (pg 102)  Lt. Pelko’s influence on his son is apparent when Adam reacts by wanting the kill Davi, but as hurt and angry as Adam is over the attack on Pearl Harbor and the probable loss of his father, he does come to realize that one cannot assume people are the same simply because they share the similar racial characteristics.

The attack on Pearl Harbor was a tragic event; some many lives were lost that day. And they should always be remembered and honored. As Harry Mazer said in his acceptance speech when he was given the 2007 Nēnē award


We need to remember. We need to know our history. The present rests on the words and deeds of those who came before us, their sacrifices and heroism, their foresight and folly. The present, this moment, your moment in time, your actions, your deeds, will influence and shape what is to come. Never forget that.

This is the message I think Mazer wants his readers to realize through his character Adam Pelko.

This book is recommended for readers aged 9-12.
This book is part of my personal library.

There is much information on the internet about Pearl Harbor and about A Boy at War.  Below are a few that might be helpful:
Scholastic has teaching resources at  My Story: Pearl Harbor
eThemes also has teaching resources at A Boy at War by Harry Mazer
The National Archives has information on President Roosevelt’s speech to congress including an annotated copy of the original typewritten speech at A Date Which Will Live in Infamy
National Geographic has resources on the attack on Pearl Harbor at http://www.nationalgeographic.com/pearlharbor/Remembering Pearl Harbor

I had a teacher in grad school who taught us the value of using a map whenever we read literature in which a place played such an important, as in A Boy at War. This is the one I used while reading.