The holiday season has officially begun. And along with it is my first Holiday Readathon running from December 2nd to 5th and all I needed to do was make a pledge for charity. My pledge is 5¢ per page read to the Salvation Army and a can of food for each book read to a local food bank.
You too can sign up at Holiday Readathon

I am beginning the Readathon with books for Chanukah because last night was the first night of Chanukah and the world’s largest Menorah was lit at Grand Army Plaza in Manhattan (59th Street and Fifth Avenue.) Chanukah is a joyous festival of lights, hope and miracles. And last night we did have a bit of a miracle when the horrible rain and strong winds stopped just in time for the lighting. If you would like to know more about this holiday, including how to make and play with a Dreidel and why children receive Chanukah Gelt, be sure to visit Chanukah on the Net 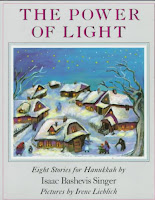 The Power of Light: Eight Stories for Hanukkah by Isaac Bashevis Singer, illustrated by Irene Lieblich.
There is one story for each night of Chanukah in this book. The sixth story, called “The Power of Light,” is about two young teens, David, 14 and Rebecca, 13, hiding from the Nazis in the Warsaw Ghetto after it was bombed and burned. They had been hiding for a long time because Rebecca was afraid to leave even though remaining there was also dangerous. But their story is one of courage and strength discovered in the glow of a miraculously found candle on the first night of Chanukah. They decide to bank on the miracle and travel through the sewers of Warsaw seeking partisans who could help them escape to Israel. Singer is a master storyteller and the stories in this book are – well – masterful. 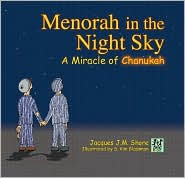 Menorah in the Night Sky: a Miracle of Chanukah by Jacques J.M. Shore, illustrated by S. Kim Glassman.
This is a story about two young boys, Zev, age 12 and David, age 11. The boys are best friends, separated from their families in Auschwitz and working in a factory separating shoes. Homesick and sad, David did not want to remember the Chanukah celebrations he had had with his family before the war. Zev wanted to help David with a miracle of hope, but all he could do was tell David to look up in the winter sky, light their found, but forbidden candle and pretend they were lighting a Menorah. That night a bright star appeared as if it were the first candle on the Menorah. But could such a thing happen again and again for 8 nights? Well, it is the season of light and miracles. 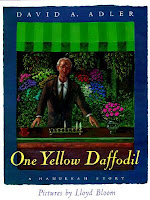 One Yellow Daffodil: a Hanukkah Story by David A. Adler, pictures by Lloyd Bloom. Morris Kaplan is a florist, an older man who lives alone. Two children pass by his store every day and buy flowers on Fridays for Shabbes. When they come in on a Tuesday and buy flowers for Chanukah, Morris tells them that he had celebrated Chanukah when he was young, but not anymore. The next day the children invite him to their home to light candles and have dinner. When he leaves later that night, he pulls out a box of the only family mementos he owns, which includes the Menorah his family used back in Poland when he was a boy. The next day, he returns to the children’s apartment with the Menorah and tells them about being taken with his family to Auschwitz and how he ultimately came to possess his family’s Menorah. Morris is the only survivor in his family, his parents, brother and two sisters all perished. He believes that he survived because just when all hope was gone, he saw a daffodil blooming in the camp, and decided that like the daffodil, he too could survive in a place that offered no other hope. 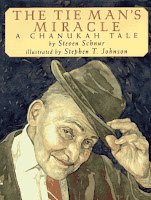 The Tie Man’s Miracle: a Chanukah Tale by Steven Schnur, illustrated by Stephen T. Johnson. Mr. Hoffman is a door to door tie salesman, who shows up on a cold, snowy night with his tattered box of ties but with no overcoat. It is the last night of Chanukah and 7 year old Seth is annoyed because he is afraid Mr. Hoffman will delay their celebration. But Seth’s parents insist that Mr. Hoffman stay and he tells them how he lost his own family, two boys, three girls and his wife, during the war. After he leaves, Seth goes into the living room to look at the candles, which have all burnt down. He wishes that the tie man be given his family back. Suddenly the room goes dark, except for nine columns of smoke from the Menorah, which braid around each other. At the same time, Seth thinks he hears voices calling “Papa, Papa.” Even though Seth looks out for tie man everyday after that, he is never seen again. Did Seth’s wish come true and was the tie man reunited with his family? It is for the reader to decide. 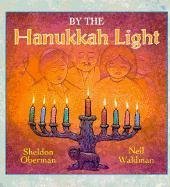 By the Hanukkah Light by Sheldon Oberman, illustrated by Neil Waldman.
This is a story about the way one family celebrates Chanukah every year. It begins when Rachel and her grandfather clean the Hanukkiah, or Menorah. On the first night, after the candle was lit, grandpa always tells the story of the Maccabbees exactly the way his grandfather had told it to him. Next, he tells the story of Hanukkiah that had belonged to his family but was left behind when they fled the destruction of their homes, school and temples by the Nazis. Later, while grandpa was still an American soldier, he returned to the destroyed home of his family, and found the Menorah buried in the ashes. This is a true miracle that his family celebrates every year.

Nine Spoons: a Chanukah Story by Marci Stillerman, illustrated by Pesach Gerber.
This is my favorite story. Every year, when Oma’s family celebrates Chanukah, she tells them the story of the Children’s Menorah. One winter, in the concentration where she was, her bunk-mate, Raizel, said that Chanukah was coming. Raizel was an artist and wanted to find a way to help the children in the barracks celebrate the holiday. She comes up with the idea of making a Menorah out of spoons, but spoons were prized possessions among the people in the camp. Nevertheless, in various, often surreptitious ways, nines spoons were collected; Raizel twisted the handles around a stem, with the bowls of the spoons facing upwards and attached it to a piece of wood. The spoons were filled with stolen kitchen oil and lit with stolen thread twisted into wicks. After the war, Oma had kept the Menorah and the children used it every year to remember how this miracle happened under such dangerous conditions. This was based on a true story, told to the author by the woman survivor who brought the Menorah with her after the war when she came to the US.