This is a true story about a group of Jewish orphans who survived outside the walls of the Warsaw Ghetto by selling cigarettes to Germans on the Aryan side of the city. Of these children, Ziemian writes on page 25
This group of Jewish children, wandering around under the very noses of a thousand policemen, gendarmes, Gestapo men and ordinary spies, constituted an unexplained and inexplicable phenomenon, no less mysterious for being real.

After the ghetto was established in 1940, some of the older kids would sneak out by various means to obtain additional food for their hungry families to supplement the meager rations given they were. These children would beg on the Aryan side and sometimes be given food by kind women, or they would sell family possessions to get money to buy bread. It was a hard and risky life for such young people.

Ziemian was part of the underground Jewish Resistance Movement in Warsaw and possessed a false ID card that gave him freedom of movement. He tells the story of Bull, whose real name Ignacy, the leader of the cigarette sellers. Bull’s life was relatively good in the ghetto until the Germans began their roundup of Jews for the first deportation to Treblinka in the summer of 1942. Right off, his father was killed by a German gendarme for possessing a packet of saccharine. Bull was seized from the street and put on a deportation train, but managed to escape from the moving train. When he returned home, he realized that his entire family was gone. He left the ghetto, hiding among a contingent of Jewish workers, but was forced to return at nightfall. He was again seized and put on another deportation train. Again he escaped. The contingent of workers welcomed him back and gave him a false work permit. He began selling possessions from the ghetto for people in exchange for food to bring back to them. One day, Bull noticed a group of four Jewish children. They found themselves under the care of Bull and the workers, until one day the workers were rounded up and deported. Bull again managed to escape, again found work as an apprentice cobbler and continued to smuggle food into the ghetto, only this time the loaves of bread also camouflaged guns. On the first night of Passover in 1943, the Germans attempted to carry out another mass deportation. This time they were met with armed resistance (the Warsaw Uprising). Again Bull found himself captured for deportation and for a fourth time he managed to escape, but suffered a serious leg injury. When his leg was healed enough to walk and he was back on the streets of Warsaw again, he met his first four cigarette sellers, who wanted him to stay with them:
“Yes, yes. I’ll work with you,” promised Bull. His arrival at the Three Crosses Square was the start of a new life for the children. Bull had authority. In their eyes he was grownup and experienced, and he became their leader. (pg 76)

Altogether, there were about 20 cigarette sellers, about five of them girls. After Ziemian befriended them, they also received false ID papers. They were continuously helped out by kind Polish women, but were dogged by “schmalzers” (blackmailers who would denounce Jews to the German authorities unless their demands were met.) Life continued to be hard, a matter of day to day survival, sleeping and eating wherever and whatever they could. Ziemian wrote about their ability to survive
After their escape from the ghetto they led an adventurous and independent existence on the Aryan side of Warsaw. Sentenced to death, hounded and harried at every step, they found a way of surviving in the jungle of the occupation. They knew how to defend themselves and how to fight for their existence; they knew – unlike so many adults – how to help each other. (pg 10-11)

There is much more to the story of The Cigarette Sellers of Three Crosses Square, including that of little Bolus, age 7 and the youngest member of the group. It is a book written for young adult readers, but because of some of the graphic content, I would recommend it to more mature YA readers. It is also a translation from the Polish and sometimes it reads a bit awkwardly, but that doesn’t really interfere with the overall story.

Ziemian never uses anyone’s last name, which I assumed was for privacy reasons, since all the survivors were still living at the time he wrote the book. Three of the cigarette sellers did not live to see the end of the war, and he does tell the reader their full names as an act of remembrance. Most of those who did survive moved to Israel after the war, but a few went to Canada. All were successful in their adult endeavors. But the point of this book is not what became of the children later in life, but it is about their survival under extraordinary circumstances and that is what makes it worth reading. It is also very interesting that, aside from this book, there is very little information about the cigarette sellers and their amazing story.
Below are some of the photographs Joseph Ziemian had a photographer in the Three Crosses Square take of the cigarette sellers 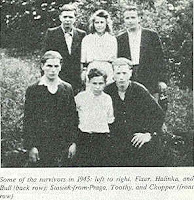 Non-Fiction Monday is hosted this week by http://www.momsinspirelearning.com/