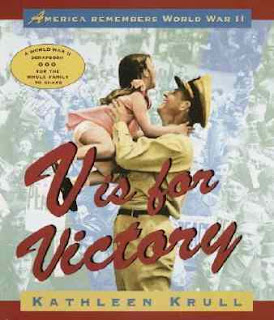 V is for Victory is an interesting book that caught my eye one day while I was at the library. In her introduction, Krull describes it as “a book about people: how the war looked to the families in the United States who were fighting it.” (pg 3) The book does indeed meet it purpose, providing an excellent overview of what life was like for everyone during the war. Nothing is covered in any great depth, but the book is written in such a way that it could easily lead to more detailed work. One of the things I really liked was Krull’s suggestion that the reader talk to family members, not just to hear what they thought about the war, but to find out how the war actually changed their personal family history.  In fact, I think this format opens up the possibility of making a scrapbook of their own in which the reader could collect family stories and photos to create pages similar to those in Krull’s book.  The entire book is loaded with very colorful photos, documents, postcards, personal letters and other types of wartime memorabilia, reminding me of the kind of scrapbook I used to keep as a kid.
V is for Victory begins with a short overview of events leading up to the war, beginning with the end of World War I. Since this is basically a book about America in the war, the next chapter is about Pearl Harbor and how that finally brought the US into the fighting. The following two chapters cover life on the home front and in uniform. On page 31 there is a photo of a soldier with all of his new clothing and equipment laid out for an inspection. Tanita Davis described the various pieces of equipment and uniforms Mare received in the WACS in Mare’s War, so I found the photo to be particularly interesting. There is also a brief mention of racial prejudice towards African-American soldiers within the armed forces, as well as civilians on the home front, something Davis also brought out in Mare’s War. The home front photos also depict the many different ways people were more positively involved in the war effort, for example, college girls knitting for soldiers and even one of a little girl giving up her doll for a rubber drive. Chapter 5 covers the evil of the Holocaust. It must be a difficult choice of what pictures and text to include when writing about the Holocaust for young people. Krull includes a photo of the cremation ovens at Auschwitz and one of the corpses found by American soldiers at the Nordhausen concentration camp. They are, as always, disturbing and for that reason, I would recommend this book for kids who are at least in 7th grade. Also disturbing are the photos and text of the next chapter on Japanese internment camps in the US. Following a chapter in which she writes about the bigotry and discrimination faced by African-Americans and another chapter that covers the racial hatred in Germany and its consequences, it is to Krull’s credit that she so bluntly points out that in: “the United States, ethnic hatred was alive and well” when she begins her chapter on the Japanese-American internment camps. (pg 53)

The next three chapters, 7, 8, and 9, cover who was who in terms of the leadership in the warring countries, the types of weapons used by each, and, finally, the end of the war. The last chapter, “Some Lasting Effecting of World War II” was very interesting, though I am not sure I agree with all of Krull’s choices. Yes, the creation of the UN and the War Crimes Trials would have lasting effects, but I would not consider the election of John F. Kennedy as President to be one, even if he was a war time hero. Krull has also appended a useful chronology of events and a short bibliography.

I had only one real problem with this book overall. Though many of the photographs were interesting, they sometimes had text superimposed on them, making it difficult to read. Or there was nothing directly written about a photo and I had to search through the text to find out what the photo was about. In the greater scheme of things, however, this is petty. I really think this is a great book and an excellent teaching tool. I personally love looking at pictures, I find they somewhat complete what I am reading about and appreciate the wide variety the archival memorabilia Krull used to enhance V is for Victory. Kathleen Krull received the following well deserved honors for this book:

1996 Award for Distinguished Non-Fiction from the Southern California Council on Literature for Children and Young People.
New York Public Library Books for the Teen Age
Bank Street College Books of the Year