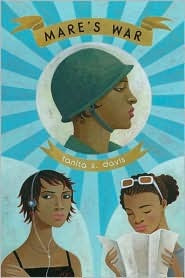 Sisters Octavia and Tali are sure that their summer vacation is absolutely ruined when they are told that they will be accompanying their grandmother on a road trip to a family reunion. But 'Ms. Marey Lee Boylen,' or Mare as she prefers to be called, is not your average granny: "She wears flippy auburn wigs, stiletto shoes and padded push-up bras." (pg 1) She also drives a sporty red car, wears long fake nails and smokes cigarettes. So it only stands to reason that Mare has a story that is not average either.

Octavia, 15, and Tali, 17, begin the trip bored and unhappy, bickering with each other and complaining about everything. Before they even leave the driveway, Mare must make a deal with Tali to stop her grumbling about her grandmother's smoking:

"Mare tugs an earphone out of Tali's ear. 'Don't put that thing on when I'm talking to you. You've had something to say from the beginning - first it's my driving, now it's my cigarettes. Tali, I'll tell you what -you keep those earphones out of your ears and I will keep my cigarettes in my purse.'" (pg 9)

The deal is struck and, throughout the trip, both are stubborn enough not to cave in.


The chapters in Mare's War alternate between Now, told by Octavia, and Then, told by Mare, with the past and present narrations separated by a postcard home from one of the girls about the trip. As they drive along, Mare begins to tell the unhappy girls about growing up black in Bay Slough, Alabama on a farm purchased by her now deceased father, about her mother and younger sister, Josephine (Feen) and about their fear of their mother's lecherous boyfriend, Toby. Mare had always been told to look after her sister, but after a problem with Toby, Josephine is sent to live with an aunt in Philadelphia. "Hasn't Mama been telling me all my life to watch after Feen? What am I supposed to do now?" (pg 45) The only thing left for the 'almost seventeen year old' Mare in Bay Slough is a job cleaning house for a white woman. But it is 1944 and the country is at war. Mare decides to run away and enlist in the WACS, or Women's Army Corps, lying about her age to get in because you must be 21 to join up.

As Mare and the girls drive along, Mare begins to talk about life in the WACS. There she meets a variety of young women and forms friendships that last a lifetime. After Mare is corrected in front of everyone by her Captain for saying "I ain't got boots yet," another new WAC, Peaches Carter, offers to make a deal with her:

"I'm offering a deal, Boylen, you show me how you crease your uniform so I don't get marked down like I always do, and I'll tell you when you get words wrong and help you say thing right. Deal?" (pg 73)

Of course, it's a deal and Mare and Peaches become fast friends.


After basic training, the women ship out for England. They are part of the 6888th Central Postal Battalion, a group of African-American women whose job it is to sort through warehouses full of letters and packages so they can be delivered to soldiers at the front. The 6888th is the only African-American female unit to serve overseas - first in Birmingham, England and then in Rouen, France and lastly, in Paris when the war is over, staying at the Hotel Bohy-Lafyette where they live lavishly compared to the Spartan lifestyle of the Army.


Despite being in the WACS and far away from her sister, Mare never forgets that she has promised Feen she would always take care of her and she continues to save for a place they can live in after the war. Throughout her service, Mare also writes home to her mother in Alabama on a regular basis, sending her money each payday to help out. Ironically, the woman who worked so hard to make sure soldiers received their mail from home, helping to keep up their morale, only received one letter from her mother the whole time she was in the army - a marriage announcement.


Mare's War is a journey of growth, revelation and understanding on many levels. By the end of the novel, all three women are not in the same place they started from and even the family reunion turns out to be something unexpected. And I loved this novel. I thought the characterizations of Mare, Tali and Octavia were absolutely spot on. One of the true marks of good historical fiction, for me, is the way the author uses her real material, and Davis did a great job of seamlessly weaving in some of the actual experiences of the 6888th with Mare's personal history. She also brought to light another part of African-American Women's history too long ignored. I couldn't recommend this book more highly.


The 6888th Central Battalion was finally honored for their service during World War II in March 2009. There is an interesting article about this at


For some interesting information about the road trip taken by Mare and her granddaughters, see
http://www.tanitasdavis.com/mare_roads.shtml


It also includes information about where to learn more about the WACS in general and the 6888th in particular.


The National Archives also has information about Aftican-Americans in World War II at http://www.archives.gov/research/aftican-americans/ww2-pictures


Below are some of the photos of the women in the 6888th Battalion you can find there: 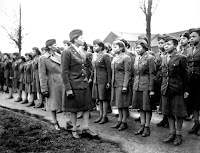 
Members of the 6888th Central Postal Directory Battalion take part in a parade ceremony in honor of Joan d'Arc at the marketplace where she was burned at the state. May 27, 1945 Pfc. Stedman. 111-SC-42644.