My Own Lighting by Lauren Wolk 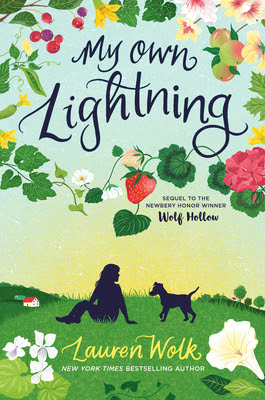 It's 1944 and WWII is still being fought far from the home front in this sequel to Wolf Hollow. Annabelle McBride, 13, is finding it hard to move on from the events of the past winter when she tried to save her friend Toby, a homeless, shell shocked WWI veteran, from the cruelty of a girl named Betty Glengarry. Now, summer vacation has just started and Annabelle has promised to help her teacher clean up the schoolhouse for next September. While there, an unpleasant stranger named Drake Graf shows up looking for his lost dog Zeus. And just as Annabelle and Mrs. Taylor are leaving the schoolhouse, not only to they hear thunder in the distance, but Andy Woodbury, Betty's partner in crime, is not far away watching them.

As Annabelle is walking home, the storm begins and a lightning strike hits her, knocking her out and stopping her heart. But then someone appears, pounding her chest and getting her heart started again, before they run off and Annabelle is carried home by someone else. When she regains consciousness, she doesn't remember who helped her , but her senses - smell, hearing, vision - are so heightened her brothers call them superpowers. The morning after the lightning strike, as Annabelle's petting their dog Hunter, she is overcome with a strong sense of real peace. Then, she learns that her brother's dog Buster is missing and that Andy Woodbury has been living in their potato house with Mr. McBride's permission after he was badly beaten at home. Later, Annabelle realizes she knows animals better than before and in a whole new way.

Being able to understand animals and feel what they feel proves to be very useful as more dogs begin to disappear. Animals are so much easier to understand than people are for animal-loving Annabelle. And so she sets out to try and discover where the missing dogs are, often in the contentious company of Andy Woodbury, while also trying to solve the mystery of who saved her life. In the course of all this, Annabelle meets the newly arrived to the area Mr. Edelman and his reclusive daughter Nora, who has her own healing to do and who has been secretly taking in injured and sick animals in need of attention that her father finds.

Annabelle had just wanted to put the traumatic events caused by Betty and Andy behind her, but she soon learns that she must reconsider some things in order to come to terms with those events. She had never wanted to see Andy again, but after learning about the abuse he is subjected to at home and also seeing how kind and gentle he is with animals, Annabelle is forced to reconsider her feelings toward him. Annabelle and Andy are both very flawed characters but their individual journeys - one towards forgiveness, the other towards redemption - show us that we don't always know people as well as we think we do. I know it sounds like there's a lot of disparate threads running through this coming of age novel, but they do all come together in the end. And although Annabelle's journey includes references to Wolf Hollow, it is not absolutely necessary to have read that first novel to understand this one.

My Own Lightning is a wonderfully layered novel that tackles themes of abuse, family, friendship, family, and acceptance and an excellent sequel to Wolf Hollow.