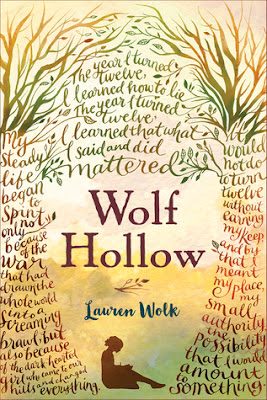 It's 1943 and the world is in the throes of WWII.  In the small rural Pennsylvania community where Annabelle, 12, and her family live, things haven't changed that much with the exception of the gold stars in people's windows indicating that they have lost a loved one in the war.

Years earlier, Toby, a gentle unkempt shell-shocked veteran from WWI, had arrived in Wolf Hallow after returning from the war, taking up residence in an old abandoned smokehouse and isolating himself from society, content to wander the woods surrounding the area to wrestle with his wartime demons.  Occasionally he would gratefully accept food from Annabelle's mother.

Into this mix, comes Betty Glengarry, a 14 year old girl who is sent to her grandparents in the country because she is considered to be "incorrigible," capable of doing harm to whomever she decides is her prey.  She immediately begins bullying Annabelle, and threatening to hurt her if she doesn't give Betty what she wants.  And she carries out her threat, hitting Annabelle on the thigh with a tree branch, when she is only given a penny.  Toby intervenes to help Annabelle and becomes Betty's next victim.

Betty insists later that she saw Toby throw the rock that hit Annabelle's best friend Ruthie causing her to lose an eye, claiming the rock's real target appeared to be an older German man who had lived in Wolf Hollow for years. But Betty knew she could capitalize on people's renewed anti-German feelings, and Toby's eccentric behavior.  Annabelle knows the truth, but everyone believes Betty. After all, Betty looks like a sweet innocent girl with long blond braids and plaid dresses, while Toby looks like a “crazy” person wearing a long coat, a hat the covers most of his face, long straggly hair and always carrying three guns across his back.

Betty continues her reign of terror directed at Annabelle, her two younger brothers and Toby, until one day, she goes missing.  And it doesn't take long for the community to point its collective finger at Toby, blaming him for what happens.

Wolf Hollow is a beautiful and sensitively written, multilayered novel that tackles some really weighty themes.  It is narrated by a now adult Annabelle, looking back over the events of 1943, the distance giving her some understanding of what happened, yet letting the reader see how limited she was in some of her choices and her 12 year-old understanding of what was happening around her.

I liked the way the author juxtaposed Betty and Toby, both characters suffering from some form of mental illness, she from what appears to be sociopathic behavior, he from PTSD, and challenging the reader to try to understand the moral dilemma that Annabelle faces.

Lauren Wolk bravely allows the level of cruelty that Betty is capable of, without regret or guilty conscience, to evolve just as she allows Toby's odd dress and behavior to unfold in order to make a very important point about preconceived notions of who is guilty or who is innocent by how they appear.  Wolf Hollow, Annabelle's grandfather explains, is named that because in the old days when everyone was farming, the men would dig a deep hole and once it was full of wolves, they would shot them to keep their community and farms safe. And the question here is just who is the wolf that is threatening Wolf Hollow now?  Toby or Betty?

This is a novel that becomes darker as the tension builds and there is plenty of tension. Though this is basically a middle grade novel, I would have to caution readers that it is not for all of kids.  There is some violence that just may be too disturbing to more sensitive readers.

Wolf Hollow is a morally complex novel that deals with themes of mental illness, courage, cowardice, and war, and yes, I highly recommend it.

This book is recommended for readers age 10+
This novel was an EARC, part of which was received from NetGalley
Posted by Alex at 8:58 AM