The Shelter and the Fence: When 982 Holocaust Refugees Found Safe Haven in America by Norman H. Finkelstein 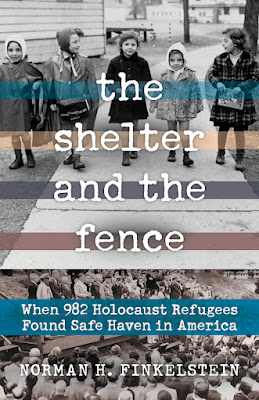 In 1944, 982 Jewish refugees living in Italy were allowed to come to the United States, "invited" by President Franklin Roosevelt. Their story is one that is often overlooked or just given cursory mention in the history of America and the Holocaust, especially where middle grade readers are concerned. Now, librarian and history teacher Norman H. Finkelstein has written a history of this event aimed at those young readers.

After providing some rudimentary information about the rise of the Nazis and their treatment of Jews through the 1930s in Germany and countries which they invaded, and ultimately Hitler's "Final Solution," Finkelstein turns his focus to those Jews who had sought safety in Italy. Italy had early on allied itself to Hitler, but Italians often refused to help them deport Jews. By 1943, Italy's fascist dictator had been overthrown and Allied troops had liberated southern Italy, but German troops were quickly moved into Central and Northern Italy, and immediately began deporting all the Jews they captured to death camps in Poland.

Then. in 1944, Roosevelt issued an executive order setting up the War Refugee Board to rescue as many "persecuted minorities of Europe" as possible. Immigration laws were bypassed because the refugees who would be rescued were considered guests of the president and would not be allowed to stay in the US once the war was over.

A diverse group of 982 refugees living in Rome were selected, most of whom were Jews, and after a rough two-week trip aboard the USS Henry Gibbons, followed by an overnight train trip from New York City to Oswego, New York, the refugees arrived at Fort Ontario on August 5, 1944. And though they were welcomed by the people of Oswego, for many refugees living in a confined space like the fort, surrounded by a chain link fence toped with barbed wire and watched by guards made many of them skeptical. And yet, the fort's barracks had been converted into furnished apartments for them, complete with laundry, bathing and toilet facilities for men and women, there was plenty to eat, though the refugees ate in dining halls instead of in their makeshift apartments.

Soon, many of the refugees found work, while their children were allowed to attend school outside the fort. They could speak on the telephone with their family members already living in the US, but they were not allowed to visit anyone (well, there were a few forays out of the camp by some teens that no one knew about). Creating a safe haven for the 982 refugees was not without its problems and Finkelstein doesn't skip over these. The biggest problem was what to do with them when the war ended. The refugees had all signed an agreement that they would return to their homeland once the war was over, but now many had adjusted to living in the US and had no home or family to return to, and wished to remain in America. This resulted in a long legal fight and  Finkelstein devotes a lot of time to it.

The Shelter and the Fence is a great introduction to this overlooked part of World War II history. It is easy to read, and there are lots of photographs and text boxes containing personal reflections by some of the people who were part of the rescue effort. I did find that at times I found the writing was confusing and I had to go back and reread parts of the book. Some things were too glossed over and without knowing the history could be disconcerting. This would make it a book that is best used as a supplementary text for social studies classes. The book does describe the many kindnesses on the part of the people living in Oswego, as well as those who did not want the refugees in their town or country.

And while saving 982 people may seem like a token rescue compared to the overwhelming number of people who perished during the Holocaust and even the refusal to allow the 937 refugees aboard the St. Louis in 1939 to enter the US, it needs to be remembered that every life is important and so this rescue should not be trivialized.

The Shelter and the Fence is a compelling book and I think that the plight of the refugees will definitely resonate with today's readers when once again America's borders have become an issue.

The New York Times published an article a year ago (September 11, 2020) about the 982 refugees who lived in Fort Ontario in Oswego, NY and you can read it HERE.

This book is recommended for readers age 9+
This book was borrowed from the NYPL
Posted by Alex at 12:12 PM