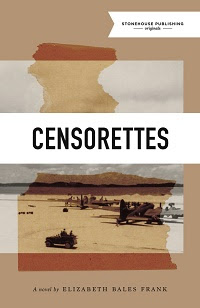 It's 1941 and Germany has been bombing London relentlessly. For Cambridge educated, Lucy Barrett, 20, it means the loss of her Italian-born mother, Tessa, in hospital being treated for illness when the building is bombed. And it means wondering what happened her beloved brother Matty, an RAF pilot, missing since Dunkirk (1940). Now, in an effort to keep his daughter safe, Lucy's father has sent her to Bermuda, to work as a Censorette for the Imperial Censorship Detachment, reading letters and looking for coded messages. And even though Bermuda is beautiful and relatively safe, Lucy intends to return to England just as soon as she turns 21, to really do her bit for the war.

Working in the basement of the Princess Hotel, Lucy shares rooms, first in the Bermudiana Hotel with Rebecca Lark, called Lark, and later moving to the Princess Hotel, where she and Lark acquire two more roommates - Georgina Taylor, called Georgie, and Ruth Smith, who chooses to sleep in a closet rather than in the bedroom with the other three women. Each of these women have particular talents for the job they do reading mail and looking for anything suspicious. Like the letters Lucy reads from a man they call Brooklyn Joe, whose English isn't very good, and who misquotes Shakespeare in them. But even after her supervisor, Colonel McKay, dismisses the first few letters, Lucy persists. Is she on to something?

Into this mix of four roommates, come more woman working for the Imperial Censorship Detachment, including McKay's secretary Rebecca Gwynne, two Belgian sisters called Fleur and Roos and then, there are the American soldiers, there to build an airport. It doesn't take long for some weekend partying to begin, complete with a piano, an accordion player and a well-stocked wet bar, thanks to the Americans, who aren't in the war and so not dealing with rationing.

One American soldier, Lieutenant William Inman, is particularly attracted to Lucy, and while she's not quite as attracted to him, it doesn't take long for his temper and possessiveness to rear their ugly heads. He is especially annoyed at all the attention Lucy gives to Ruth, whom she has taken under her wing and brought her into the fold. Ruth, who likes to paint using watercolors, has always been told that she is "an odd duck. Mental. Looney." Under Lucy's mentoring, she begins to come out of her shell and participate in dances, movie going, and parties. Much to the chagrin of Bill Inman. But when Ruth is found murdered in a park one Sunday morning, her death is not really investigated and her family is disinterested. Lucy, however, has her suspicions.

This is not a mystery novel and Ruth's death is not at the heart of it. What is at the heart is women's friendships and the ways in which women were treated by the men in their lives at the time. From the moment Lucy's father exerts his parental control by sending her to Bermuda for his own peace of mind, to McKay's dismissing Lucy's suspicion about Brooklyn Joe and his letters despite her Cambridge education and her fluency in English, Italian, French, German, and Shakespeare, to Bill Inman treating her as if she were a piece of his personal property, Lucy's strength and intelligence are devalued at every turn. It is only among her female companions that she find the validation she craves. The novel changes time frames to capture the interesting back stories of Lucy and each of her roommates, so the reader knows exactly where they are coming from in life and why they are who they are.

Censorettes is a multilayered, well textured novel that moves along at an unhurried, never boring pace (reflecting a sunny, leisurely life on Bermuda, even in wartime?). It kept my interest all the way through, so much so that I hated to have to put the book down for different reasons and couldn't wait to get back to it. There is much going on in the novel, but I don't want to spoil it. There are also lots of timely details about life on Bermuda during there war adding depth to the story and which I found very interesting. Movies, songs, different places are all mentioned and are all spot on correct. In this respect, it reminded me of the Maggie Hope mysteries by Susan Elia MacNeal.

If you are interested in women in WWII, you might find this is a book for you. It is based on the real Censorettes working in Bermuda then, and I highly recommend reading the author's Notes and Acknowledgments in the back matter. You might also want to read about how Elizabeth Bales Frank was inspired to write Censorettes while visiting Bermuda on Sarah Johnson's blog Reading the Past.

This book is recommended for readers age 15+
This book is was gratefully received from the author.
Posted by Alex at 12:27 PM