Nicky & Vera: A Quiet Hero of the Holocaust and the Children He Rescued by Peter Sís 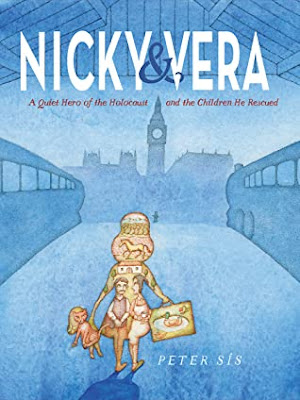 Nicky & Vera: A Quiet Hero of the Holocaust and
the Children He Rescued
written and illustrated by Peter Sís
Norton Young Readers, 2021, 64 pages
Available January 26, 2021
I remember reading about Nicholas "Nicky" Winton (1909-2015) while I was doing some dissertation research on Czechoslovakia. Nicholas is credited with saving 669 children in 1938, separate and apart from those children saved through the Kindertransport program. Now, Nicholas's act of heroism has been made accessible to today's young readers, thanks by the very talented Czech-born American artist Peter Sís. 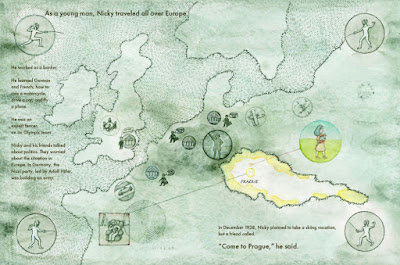 Sís begins Nicky's story with a brief biography of Nicky's early life. Then, in  December 1938, a friend of Nicky's told him to come to Prague, Czechoslovakia. Earlier, in October 1938, Adolf Hitler's army had marched into the Sudetenland on the Czechoslovakian border. As soon as he arrived in Prague, Nicky realized that something had to be done. The world would soon be at war, but he knew that England would accept children under 17 if sponsors could be found for them and travel could be arranged, and so he set to work.
In a town outside of Prague, 10-year-old Vera Diamantova's mother heard about an Englishman who was trying to get Jewish children out of harm's way, and her parents decided to see if Vera could be one of those children.
Nicky spent most of 1939 in Prague and London preparing everything that was needed to get the children out of Czechoslovakia - making lists and getting photographs of the children, finding train connections, getting visas and advertising for families to take them in. Nicky paid for all of this himself.
Meanwhile, in March, 1939, Germany invaded the rest of Czechoslovakia, and Vera's family were told they must give up their home to the occupying German army. Finally, though, the day came for Vera to leave, and her father gave her a diary to record memories so they could read them after the war. Three days later, Vera arrived safely in London, one of the 669 children Nicky rescued. 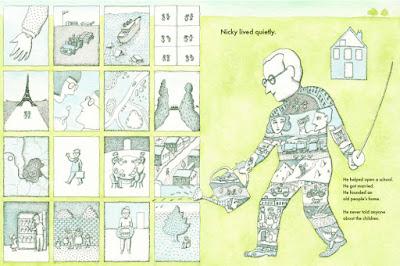 After the war, Nicky lived a quiet life and no one would have learned about his act of heroism if his wife had not found his old records. Now, the world knows what this quiet, kind, unassuming man managed to accomplish against all odds. Sadly, when Vera returned to Czechoslovakia, she learned her parents and most of her family had perished in the Holocaust.
Although I knew Nicky's story, there are lots of details I hadn't known before in this beautifully render picture book biography for older readers. And I loved the way Peter Sís intertwined Nicky's story with Vera's making it more personal and emotional, sensitive without being sentimental.
Sís tells Nicky and Vera's stories using spare text and simple declarative sentences. Using stylized maps (see illustration above), cutaways, and color, the illustrations really moves the story along, providing a multitude of images to pour over and discuss. I'm sure you will notice immediately that blue is the dominant color for Vera, while a light green is used for Nicky, and gray for the Nazis. Two of my favorite illustrations show the readers the internal memories that are carried by Nicky after the war (above) and Vera arriving in London. I found this to be exceptionally moving and poignant. 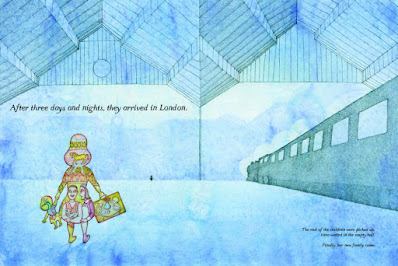 Nicky & Vera: A Quiet Hero of the Holocaust and the Children He Rescued in a compelling look at these to lives. If you read the Author's Note, you will learn how and what motivated Peter Sís to write Nicky and Vera's stories.
This book is recommended for readers age 7+
This book was gratefully received from Edelweiss+
Posted by Alex at 3:38 PM