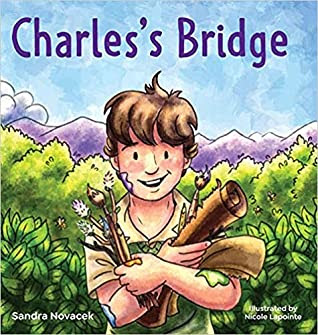 Charles's Bridge by Sandra Novacek,
illustrated by Nicole LaPointe
Ten21 Press, 2021, 36 pages
Available January 12, 2021
It's 1938 and Charles Novacek, 11, his parents, and sister are being forced to leave their home in Hrachovo, then part of western Czechoslovakia and recently occupied by Nazi soldiers, and relocate to Náměšť nad Oslavou, Charles's father's hometown in eastern Czechoslovakia.* Charles desperately wants to take his precious art supplies with him, but his father is adamant about leaving them behind. There simply is no room for them in the cattle car that carrying their belongings. After all, they are not the only family being evacuated. 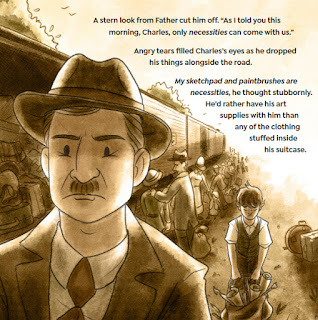 Lonely and homesick, sharing a room with his sister, and being made fun of because of his Slovakian* accent when he speaks Czech. Charles spends his afternoons roaming the nearby forest, fishing and looking for good hiding places once the imminent war begins. One day, Charles notices a beautiful bridge spanning a river. With it's impressive statuary of archangels lining the bridge on either side, Charles fervently wishes he could paint this magnificent bridge. If only he had his art supplies! 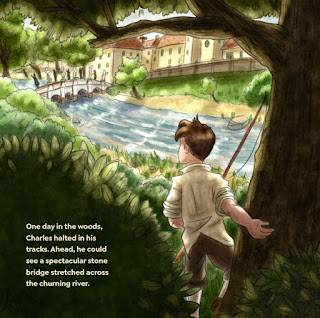 But with paper and paint in short supply and war coming, painting this beautiful bridge, or anything else, seemed an impossible dream. Or was it? A few days later, on one of his solitary walks, Charles's notices some wet clay in the river bank, and suddenly he has a brilliant thought. Could he make his own paint using all natural ingredients and begin painting again? Using the clay from the river, plus some of the different herbs and vegetables in his mother's garden, and finally being given some paper used by the town barber, Charles cobbles together paints and brushes and is finally able to paint the bridge he has come to admire so much. 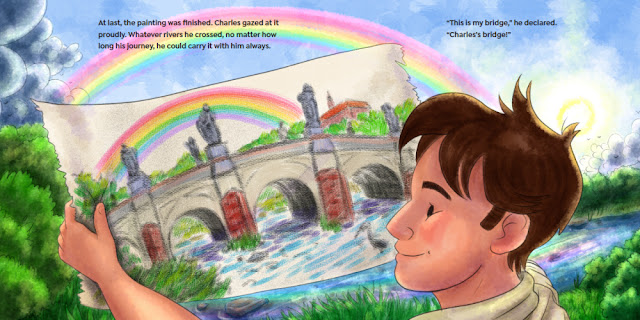 Charles's Bridge is a wonderful story of creativity, ingenuity, and resilience and ingenuity in the face of all odds. Charles need to paint, to express himself through his art, and to help him through his isolation and loneliness should be a real inspiration to young readers. When I read this to my young readers, I didn't go into the reasons the Novacek's had to leave their home, but the kids did understand that the family was forced to leave (we've read enough refugee stories and talked about them a lot recently). What really impressed them was the way that Charles managed to make his own paint and brushes. In a time when so many kids feel isolated because of Covid-19, I think they felt as though they had found a fellow traveler in Charles.
* For those who may have forgotten some pre-WWII history, the Novacek family were forced to leave their home because of the Munich Agreement. This was the 1938 agreement between Germany, Britain, and France that allowed Adolf Hitler to annex the mostly German Sudeten territory in Czechoslovakia in the hopes of avoiding war.
Be sure to read the Author's Note to find out about the fate of the original painting of Charles's bridge and its painter. I should mention that the author, Sandra Novacek, was married to Charles and it was he who told her about how he came to paint the bridge.
This book is recommended for readers age 5+
This book was a PDF copy gratefully received from Rachel Anderson at Ten21 Press
You can read more about Charle's life in Border Crossings: Coming of Age in the Czech Resistance, written by Charles Novacek and also published by Ten21 Press. 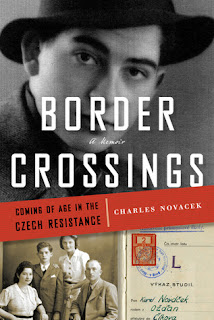