A Scarf for Keiko by Ann Malaspina, illustrated by Merrilee Liddiard 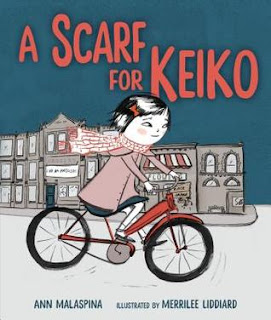 Ever since President Roosevelt had declared war on Japan on December 7, 1941, the kids in Sam's class have stopped talking to the Japanese American kids at school. Now, Sam's whole class are learning to knit so they can make scarves and socks for the soldiers who are fighting in the war, including Sam's older brother.

But Sam hates knitting and he isn't very good at it, unlike Keiko Saito, whom he's know for years and who sits next to him in school and is a great knitter. But whenever she offers to help him, he refuses. In fact, Sam now refuses to have anything to do with Keiko, even after witnessing her being harassed by a teenager as she rode her bike home from school.

But when Sam's mom sends him to the flower shop for some flowers for Shabbat, he sees that Mr. Saito's grocery has been vandalized and Go Back to Japan is written on the closed flower shop. During the Shabbat meal, Sam's dad tells him and him mom that President Roosevelt has decided going to send people of Japanese ancestry away, fearing they might be spies for Japan.

On Monday, Keiko isn't in school, but Sam sees her after school, knitting in front of her house. At home, Sam's mom tells him the Saito have to pack and leave soon, taking only what they can carry and she has volunteered to care for Mrs. Saito's lovely tea set. On the morning after the Saitos have left, Sam finds Keiko's bike in front of his house with a note for him to use it while she's away and a pair of hand knit socks for his brother Mike.

Thinking that Keiko will be cold where she is in the desert, Sam is determined to learn how to knit something to send her: a lovely red scarf to keep her warm.

A Scarf for Keiko is a great story about tolerance and how easy it is to be swayed by friends into turning on good neighbors and friends because they are being portrayed as being un-American simply for being who they are. It also shows how conflicted Sam is about no longer being friends with Keiko, whose family has been such good neighbors with his family, and the way his brother Mike helped Keiko fix her bike, and then not speaking up when he sees injustice all around him. He conflict is increased when his mother reminds the family that her sisters in Poland are in danger because they are Jewish and that Mike is in danger as a soldier.

The simple illustrations add much to the story and are done in a muted palette of blues, browns, greys, and touches of red that give a retro feeling. Faces are a bit exaggerated so that they reflect the wide spectrum of character's emotions - fear, conflict, worry, sadness, hate, kindness, even happiness.

A Scarf for Keiko is a great picture book for older readers who may be old enough to have witnessed acts of intolerance in today's world and are also conflicted about what is happening.

Back matter includes an Author's Note that explains why and how people of Japanese ancestry, including Japanese Americans like Keiko and her family, were put in internment camps by President Roosevelt's Executive Order 9066. I need to mention that there is a typo here, stating the date of the Japanese attack on Pearl Harbor as December 6, 1941, when in reality it was December 7, 1941. Other than that typo, this is an excellent book to share with young readers.

This book is recommended for readers age 7+
This book was borrowed from the NYPL
Posted by Alex at 11:00 AM