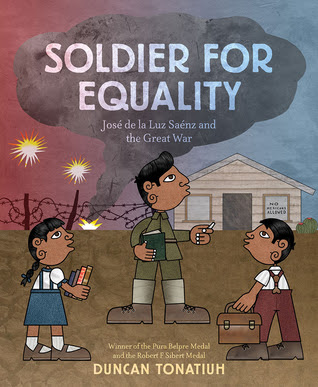 Despite being born in the United States, José de la Sáenz and other people of Mexican origin (Tejanos) living in Texas were often harassed and mistreated. They were people who did as much and sometimes more work than the white Texans, but were still treated like second-class citizens. They were prohibited from entering business with signs reading NO MEXICANS ALLOWED, and children were sent to schools that were segregated, small, cramped and ill-equipped. José was proud of his Latinx roots and worked hard, graduating college and becoming a teacher.
When the United States entered WWI in 1917, José and other Mexican American men did not hesitate to enlist to defend their country, a country they loved. José was sent to boot camp in Oklahoma, where he and others were still mistreated by their white officers. These were the soldiers who formed the 360th Regiment of the 90the Division of the US Army.

Finally, in June 1918, José and the other soldier left for the war in Europe, arriving in France shortly after. There, José began to study French, relatively easy for him given the similarities it has with Spanish. Because of his quick language skills, José worked in communications in a protected command post instead of fighting in the trenches. In fact, the war ended just before he was finally sent to fight in a attack that José knew would mean the death of thousands of American soldiers.
Back in the States, José began to organize the Mexican American soldiers of the 360th to socialize and talk about their experiences. That led to an idea to form organization that would fight for the rights of all Tejanos. But back home in Texas, José noticed nothing had changed. It was time for José and all Mexican American veterans together with other Tejano other civil rights leaders time to organize.  Finally, in 1929, the League of United Latin American Citizens (LULAC) was formed. José remained a member of LULAC, fighting to end racism, prejudice and school segregation, and for equality and justice for all Latinx.

The life and work of José de la Sáenz is certainly inspiring and, might I add, timely. As usual, Tonatiuh has really done some careful research on his subject, using the diaries that José kept over his lifetime to the best advantage in this new work. To give it a feeling of authenticity, simple Spanish phrases like No es justo are included throughout the book, but require no previous knowledge of Spanish, since like French, there is enough Latin in English to understand them. But, because Tonatiuh is a thorough writer, there is a Glossary included in the back matter. Also included in the back matter are references to the quotes and paraphrases from José's diaries that are used in the text, an important Author's Note, a Timeline of WWI and José's involvement, as well as a Timeline of the League of United Latin American Citizens, and a Select Bibliography.

Tonatiuh's flat, geometic hand drawn illustrations are done in a palette of dark earth-tones, then digitally collaged, and are done in the same style as his other books. This style is based on the Pre-Columbian 15th century art of the Mixtecs, an indigenous group from Southern Mexico, and Tonatiuh has been using it ever since to foster a sense of pride in Mexican culture for his readers.

This is a wonderful book for anyone interested in WWI and/or Latinx history and I highly recommend it. It would be an especially nice book to share with students for Veterans Day which is coming up on November 11, 2019.

You might want to pair this with other Mexican wartime heroes found in The School the Aztec Eagles Built: A Tribute to Mexico's World War II Air Fighters by Dorinda Makanaõnalani

This book is recommended for readers age 7+
This book was purchased for my personal library
Posted by Alex at 11:39 AM