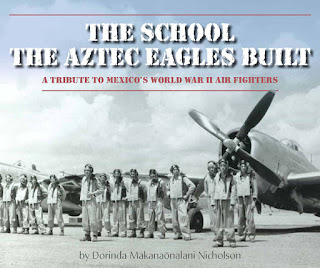 In this informative new book, Dorinda Makanaōnalani Nicholson relates the exciting and relatively unknown story of how a newly formed Mexican Air Force squadron managed to become an important part of World War II, fighting with the Allies in the Philippines and being the reason for a new school to be built in Tepoztlán, Morelos, Mexico.

Relations between the United States and Mexico haven't always been very friendly. In the 1800s, the two countries went to war against each other over land that Mexico had claimed in the southwes but ultimately had lost to the US. So when the United States was forced into World War II with the Japanese attack on Pearl Harbor, a reconciliation between the US and Mexico that had finally begun in the 1930s was further solidified after German U-boats torpedoed two unarmed Mexican oil tankers and Mexico declared was on the Axis powers.

In an agreement between President Franklin Roosevelt and Mexican President Manuel Ávila Camacho, it was decided that Mexico would send a group of 38 of its best pilots to the US to be trained.  The pilots became known as Air Fighter Squadron 201. On the day they left Mexico, June 20, 1944, President Camacho asked if any of the pilots had a last-minute or special request. One of the pilots, Ángel Bocanegra del Castillo, a teacher from Tepoztlán, managed to get the Mexican president to promise he would build a desperately needed school in there. The men then boarded the train that would take them to the US for combat training, after which they shipped out to the Philippines.

In The School The Aztec Eagles Built, Nicholson has written a wonderful tribute to these Mexican heroes. And woven into the history of the Air Fighter Squadron 201 is the personal story of Ángel Bocanegra del Castillo, who father, a high-ranking soldier himself, had originally wanted him to enter military service, but who wanted to teach instead. And yes, the school Ángel has asked for was built by the time these hero pilots returned after the war and is still in operation to this day.

In this nonfiction picture book for older readers, Nicholson presents her information in a clear, coherent manner, chronologically following the pilots through their training and their combat fighting. She has included copious photographs, not just from WWII, but right up to the present. In addition, there are maps to help orient the reader. Also included is an important Author's Note, a Glossary and Pronunciation Guide, Author's and Quotation Sources.

The School The Aztec Eagles Built is a true life story that is sure to please young readers interested in World War II, especially lesser known ones like this. And it was so nice to read about a time when US-Mexican relations were so positive and productive.

This book is recommended for readers age 8+
This book was provided by the publisher, Lee & Low Books
Posted by Alex at 9:13 AM