The Orphan Band of Springdale by Anne Nesbet 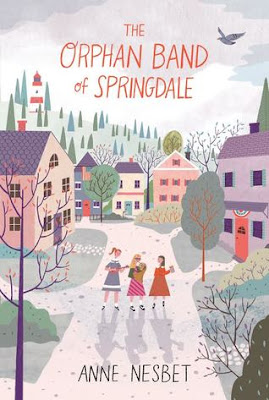 It's 1941 and Augusta "Gusta" Hoopes Neubronner, 11, is on a bus traveling with her French horn from New York City to Springdale, Maine by herself. She wasn't always by herself, but she had to leave her parents for financial reasons and go to live with her grandmother in Maine. Gusta's mother had remained in NYC working. Her German-born father had traveled with her until he had to abruptly get off the bus in Portland, Maine when two men boarded looking for him. Gusta's father is a union organizer, an accused communist, and therefore a wanted man.

To Gusta's surprise, her grandmother, Clementine Hoopes, and her Aunt Marion Hoopes run a small orphanage in their house and were not expecting her. Nevertheless, after reading the letter Gusta's mother sent with her, they welcome her into the house and pretty soon she is assimilated into their daily routine. She quickly becomes friend's with Josie, an orphan already in high school, and her cousin Bess, who lives nearby. Gusta settles in at school as well, but when it is discovered how really nearsighted she is, she is sent to an oculist, Mr. Bertmann, a German immigrant, to have her eyes tested and get a pair of glasses. To pay for them, Gusta will work in his shop a few afternoons a week dusting, helping with his accounts, and taking care of his beloved carrier pigeons.

Gusta also loves playing her French horn, but her grandmother doesn't see the value of music and forbids her to practice at home. Gusta's Aunt Marion has always won a blue ribbon for her jam at the county fair, something her grandmother brags about often. Josie suggests the three friends form a band and enter the Blue-Ribbon Band competition at the county fair next summer, hoping to win and change Gusta's grandmother's mind about music, it is an idea met with enthusiasm.

Gusta, who knows something about union organizing, decides to help her Uncle Charlie. He had been injured in at work accident at Kendall Mills and is not longer able to work unless he has an operation the family can't afford. Gusta invites a labor organizer to Springdale to organize the Kendall family's factory and hopefully get some compensation for Uncle Charlie.

And then there is the war in Europe. Though the United States is still not in the war yet, patriotism is running high in Springdale. A new airfield is about to open and the Springdale Aviation Committee is sponsoring a contest for the best patriotic essay on the theme "A Vision of American on High." And snooty classmate Molly Gowen is starting a Real Americans Club with the help of the Women's Patriotic Society of Springdale and she's made it clear that Gusta is not qualified to join because of her German father. Nor does all this misplaced patriotism bode well for Mr. Bertmann and his carrier pigeons, as you can imagine.

Oh yes, there is also a magic wish that threads through this story, an belief that Gusta holds on to tightly in her new living situation.

I had a little trouble getting into The Orphan Band of Springdale at first, but once I did, I couldn't put it down. And I won't kid you, this is a big book - 448 pages long - and I know it looks like there's a lot is going on in it, and that's probably because a lot is going on. But eventually it all comes together and long hidden truths are exposed, including a family secret in the Hoopes household that will leave you gobsmacked.

Gusta is a very likable character, well developed and with an wonderful internal dialogue that really lets her personality shine through. She is also a girl with a well-developed moral compass, thanks to her parents, and alway just wants to do the right thing. And it is through her goodness that the hidden secrets and nativist patriotic agendas are ultimately exposed and truth is illuminated. Hence, Gusta's new glasses serve as a metaphor for events in the novel or as her father described it "the way the sun catches things out against the darkness of a coming storm: "the clear light of trouble." (pg 29)

The Orphan Band of Springdale is a thoroughly satisfying novel, with a kind of comforting heartwarming old fashioned sensibility as it explores themes of family, truth, misplaced patriotism, otherness, and, finally, forgiveness. The book I had trouble getting into turned out to be just that book I wanted to read.

This book is recommended for readers age 9+
Thank you to Candlewick Press for providing me with a copy of this book.