Standing Up Against Hate: How Black Women in the Army Helped Change the Course of WWII by Mary Cronk Farrell 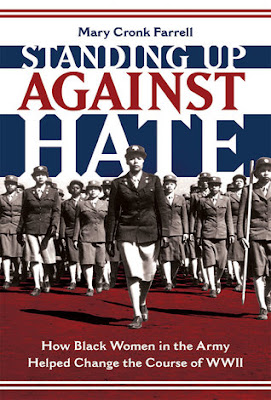 I've just reread Mare's War by Tanita S. Davis, a novel about one woman who had enlisted in the Women's Army Corps during WWII and was part of the 6888th Central Postal Directory Battalion. I've always thought that the author had really captured the difficulties of being an African American woman in the armed services at that time. And now, Mary Cronk Farrell has written a book that explores these difficulties in depth and introduces readers to some of the courageous African American women who served their country with determination, dignity and patriotism.

Farrell begins with the creation of the Women's Auxiliary Army Corps in May 1942. Though women in the WAAC were not considered to be military personnel and so they had no rank, no entitlements for dependents, and received less pay than men in the military, women signed up anyway, wanting to do their patriotic duty for their country. Thanks to the efforts of Eleanor Roosevelt and Civil Rights leader Dr. Mary McLeod Bethune, black women were also allowed to join and train for positions of rank, and a number of women were recruited from different colleges around the country for officer training.

After training, African American women like Lieutenant Charity Adams were assigned a command of enlisted women of color ready to begin basic training. These were women who wanted to serve their country, but they also "saw the army as an opportunity to better their life, find adventure, or see the world." (pg. 49)
What officers and enlisted black women hadn't really counted on was the army's policy of segregation. While discrimination wasn't tolerated, the army continued the practice of separating black and white soldiers under the idea of separate but equal. But, as Farrell shows, it was definitely separate, but it wasn't equal. For example, after basic training, black WAACs sent to southern bases were ordered to do menial tasks, such are cleaning toilets, scrubbing floors, and stacking beds. If they objected, they were given even more grunt work to do, such as washing the walls in the laundry, and doing the laundry - all jobs that had not been approved for WAACs to do. Sometimes, there was even talk of a court-martial for such insubordination. What is interesting is that Farrell looks at the responses of the African American women when they were faced with Jim Crow laws, prejudice, segregation, and ordered to do menial tasks, interviewing several of the women who served and were still living while she was writing this book.

A good potion of the book is devoted the 6888th Central Postal Directory Battalion (aka the Six Triple Eight), the only female African American battalion to serve overseas and under the leadership of Major Charity Adams. In February 1945, more than 800 members in the 6888th were sent to Birmingham, England to sort through "six airplane hangars, piled to the ceiling with bags of mail," letters and packages that had been piling up for months (pg. 4) These WACs* knew it was important work, soldiers needed their mail from home and the women worked under the slogan "no mail, low morale." After their mission in England was finished, the 6888th moved on to Paris, France.
Standing Up Against Hate is a book about service and honor that will draw in young readers and keep them. It is informative and reader accessible, with personal accounts that bring the history of African American women serving in the army vividly to life. Complimenting and supporting these accounts are copious archival photographs, many of which include the women interviewed.

If you've ever read a book by Mary Cronk Farrell, you know that she is a careful researcher, and talented craftswoman at telling a true story. Though much in this book is a positive look at the women and their accomplishments, it is also concerned with institutionalized racism and discrimination that faced both black men and women in the armed services during WWII. Nor, does Farrell does not shy away from describing some of the degrading treatment personally directed by individual women - not just by southern white male officers, but by fellow white WACS, and civilians, male and female, while riding buses and trains, called names and at times, badly beaten. Yet, they continued to serve with dignity.

Did the WAC provide the hoped for opportunity to better their life, find adventure, or see the world? You be the judge!

Farrell supplements her text with an abundance of photos and newspaper articles, many of which I had seen before. Back matter includes an Author's Note, a Glossary, a Time Line, Notes, and a Select Bibliography.

There is a teaching guide available on the author's website for this outstanding book.

Standing Up Against Hate is a book I couldn't put down and I can't recommend it highly enough for both middle and high school age readers. There is just so much to learn from it. Enhance your readers experience by pairing this with Mare's War.

This book is recommended for readers age 10+
This book was an ARC sent to me by the published, Abrams BFYR