Fish for Jimmy: Inspired by One Family's Experience in a Japanese American Internment Camp written and illustrated by Katie Yamasaki 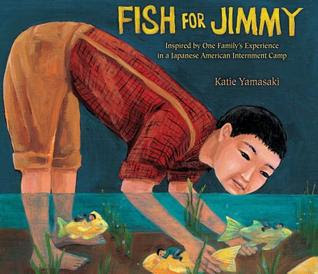 When people of Japanese descent were rounded up and sent to live in internment camps shortly after the United States entered World War II, they found themselves eating a very different diet than the fresh fish, vegetables, and fruit that had been available when they had lived near the Pacific Ocean. Jimmy and his older brother Taro are no exception to enjoying fresh food, after all their parents own a Farmer's Market.

But early in December, after the attack on Pearl Harbor, their father is taken away by three men in the FBI. The family can no longer live in their home and run their Farmer's Market, and Jimmy, Taro and their mother find themselves "forced to live in tiny barracks surrounded by guards." Confused about what is happening, Jimmy refuses to eat the unfamiliar food he is served.

And no matter how much they try to coax him, no one can get Jimmy to eat. Although everyone is worried about him, Jimmy just doesn't understand why his family isn't living in their home near the ocean. Or why they can't eat his mother's good rice and noodles, or the fresh vegetables and fish he loves so much? Soon, Jimmy even stops playing with the other kids.

One night, Taro, worried about Jimmy and feeling responsible for taking care of him in their father's absence, makes a big decision. Taking a borrowed pair of garden shears, he quietly leaves the barrack, find a place in the fence where the guards can't see him and clips a hole he can crawl through.

Finding a mountain stream, Taro waits until he feels a fish hitting against his leg, then quickly grabs fish after fish, wrapping them in his mother's scarf. And in the morning, there is fish for Jimmy, who finally eats to his mother and Taro's relief.

In her end note, author Katie Yamasaki writes that Fish for Jimmy is based on a true story from her family's history. Her great-grandfather was arrested by the FBI just as Taro and Jimmy's father had been, though it was her grandfather's cousin who snuck out of the camp to find fish for his young son. I think that by putting the stories together, Yamasaki is able to highlight the impact that interning innocent people, particularly children, based solely on their ethnicity through Jimmy's depression and his refusal to eat and works to make this a very accessible story for young readers. Sadly, it made me think about all the Jimmys who found themselves in these camps and who were too young to understand what was happening.

The illustrations, done with acrylic paint, vividly capture the emotions each person is feeling. The reader sees Jimmy going from a happy little boy to a depressed child and finally as a smiling kid after having a taste of home again. The danger Taro faced sneaking out to catch the fish is aptly shown in a spread with the barbed wire fence in the foreground and guards with big guns in the background, and behind that, readers can see Taro's searching for the right spot in the fence to cut through. It is a wonderful, dynamic, rather sophisticated image, and Yamasaki the muralist painter is really present in it.

Fish for Jimmy is an excellent choice for introducing the history of the internment of Japanese Americans to young readers and it will definitely resonate with things happening in today's world for them.