The Whispering Town by Jennifer Elvgren, illustrated by Fabio Santomauro 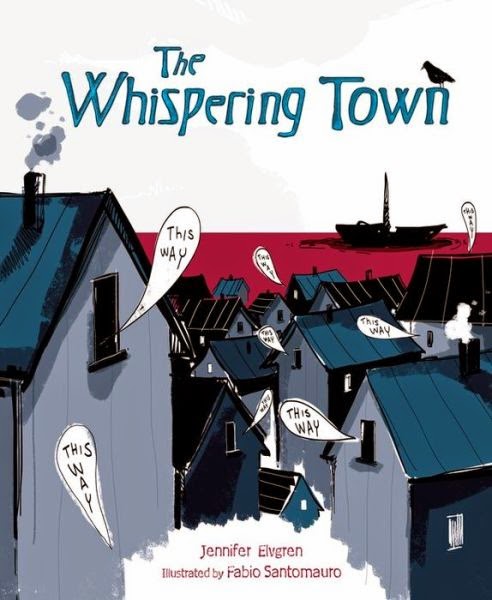 It's 1943 and Denmark has been occupied by the Nazis since 1940.  One morning, when young Anett comes downstairs, her mother tells her that there are 'new friends' in the basement.  Anett isn't the least bit surprised to hear this and simply goes downstairs to the secret room to bring breakfast to young Carl and his mother, Danish Jews waiting for a fishing boat that will take them to the safety of Sweden.

The nights are foggy and cloudy, and the new friends can't leave right away.  Each day, Anett stops to pick up things they need - extra bread from the bakery, extra eggs from the farmer, extra books from the library for Carl to read.  And at each stop, Anett whispers to the baker, the farmer, the librarian that there are new friends who need these extras.

When the Nazi soldiers knock, Anett tells them there are no Jews in the house, and though they go away, the solders do so with threats.  Later, it becomes clear to her parents that they can't wait any longer.  But how to get Carl and his mother to the harbor in a dark, cloudy, foggy night?

Well, young Anett has a solution.  That night, as Carl and his mother leave the hidden room in the basement, all over the village there are whispers of "This way."

Jennifer Elvgren's simple depiction of this dangerous, yet heroic rescue makes this story all the more poignant.   There is no sentimentality, but this gentle story shows ordinary people just doing what needs to be done to keep other people safe from Nazi hands.  But it will no doubt elicit questions from curious young readers and is probably best read with an adult who can answer them age appropriately.

Fabio Santomauro used sparse, dark cartoonish illustrations that seem to work very well with the simplicity of the text and he has chosen a palette of the dark foreboding black, blues and grays broken up with bits of reds, yellows and khaki dialogue against an almost white background.  The dialogue is done in word bubbles.  This style may attract young readers and make them feel comfortable, but there is nothing cartoonish or funny about the story. 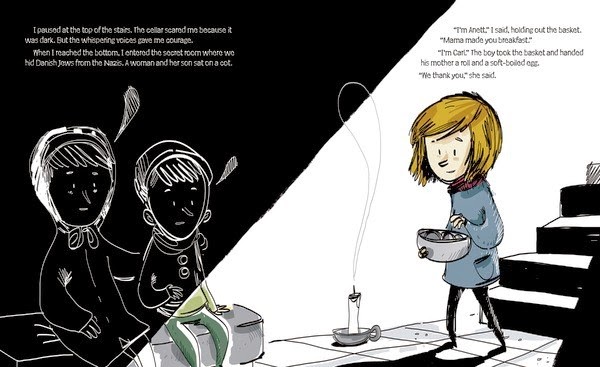 By now, most of us are familiar with the story of how Danish Jews were smuggled out of Denmark by Danes who refused to support and collaborate with their Nazi occupiers.  In fact, according to the United States Holocaust Memorial Museum, the Danes were the "only occupied country that actively resisted the Nazi regime's attempts to deport its Jewish citizens."

So it is no surprise that the best resistance, rescue and escape stories set in Denmark always come from real life.  In her Author's Note, Elvgren writes that The Whispering Town is based on one of the true stories from the fishing village of Gilleieje.  And if Gilleieje sounds familiar to you, you may remember it from Number the Stars by Lois Lowery.  Elvgren writes, 1,700 Jews escaped from this small fishing village.  In fact, Danes managed to evacuate 7,220 out of 7800 Danish Jews, 668 of their non-Jewish spouses.
If you are looking for a way to introduce young readers to the Holocaust, The Whispering Town will definitely help you do that.

This book is recommended for readers age 5+
This book was purchased for my personal library
Posted by Alex at 8:35 AM