The Only Thing to Fear by Caroline Tung Richmond 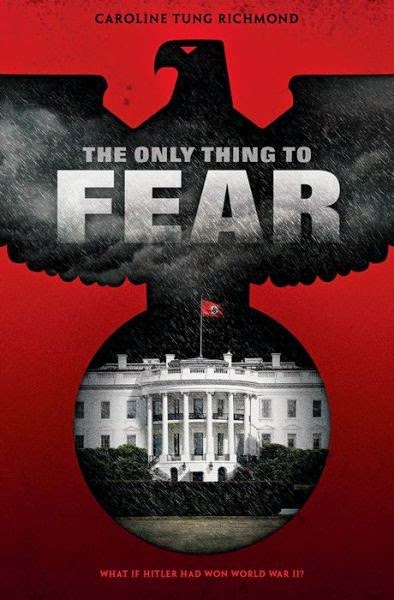 Have you ever imagined what the world would be like if the Axis powers, Germany, Japan and Italy, had won World War II.  Well,  author Caroline Tung Richmond has done just that in her debut novel The Only Thing to Fear.

For Zara St. James, 16, living in the Shenandoah Valley in the Eastern American Territory, life has been hard.   She has lived with her Kleinbauer (peasant) Uncle Red since her mother was killed by the Nazis in a Resistance mission when Zara was 8.  Since then, Uncle Red has wanted nothing more to do with Resistance matters, but Zara can't wait to join Revolutionary Alliance, and with good reason.
English on her mother's side, Japanese on her father's, Zara is considered a Mischling by the Germans and there has never been a place for mixed-race children in Nazi society. But Zara is also hiding a secret, one that would mean instant death - she is an Anomaly, able control the air around her.  Anomalies are the result of genetic testing by the Nazis in their concentration camps in the 1930s and, as super soldiers, they helped them win the war.  But only full-blooded Aryans can be Anomalies, everyone else is put to death instantly.

Into all this comes Bastian Eckhartt, son of the formidable Colonel Eckhart, commanding officer of Fort Goering.  Bastian attends the elite military academy where Zara is assigned cleaning duties and lately she has noticed he has been looking her way more and more frequently.  But what could the son of a powerful Nazi leader possibly want with a Kleinbauer who garners no respect whatsoever?  The answer may just surprise you.

I was really looking forward to reading The Only Thing to Fear when I first heard of it.  There aren't many alternative histories for teen readers about the allied Forces losing the war to the Axis powers and what that would have meant for the future.  Unfortunately, this doesn't come across as an alternative history so much as it really just another dystopian novel.   What seems to be missing is a strong sense of ideology - on both the Nazi and the peasant side.  The Resistance was there to overthrow the cruel Nazis, but there is not sense of how or why they will make the world better if or when they succeed.

Richmond's world building was pretty spot on, though not terribly in-depth.  I really like the idea of generically engineered Anomalies, which added an interesting touch.

Zara is quite headstrong and can be a bit whinny and annoyingly brave in that she takes chances without thinking through the consequences.  Zara has a lot to learn, and a lot of growing up to do, even by the end of the novel (or maybe it is going to be a series and she can mature at a later date).

One of the things that always amazes me in books about people fighting for their lives is that there is always time for romance.  Yes, Bastian is originally interested in Zara for reasons that have nothing to do with romance, yet even as things take a dangerous turn, they both find they are attracted to each other.

The Only Thing to Fear is definitely a flawed novel, but still it is one worth reading.  As I said, it is Richmond's debut novel, and though you might find it a bit predictable, it is still a satisfying read.

The Only Thing to Fear will be available in bookstores on September 30, 2014.

This is book 11 of my 2014 Historical Reading Challenge hosted by Historical Fiction
Posted by Alex at 5:21 PM