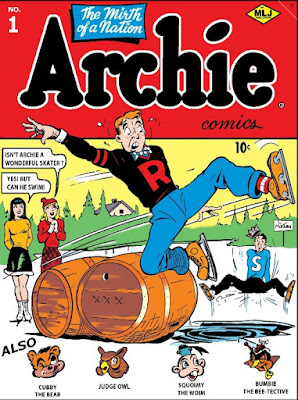 I decided not to go to Comic Con this year, after standing on line to get in for almost 4 hours last year. But I’ve been thinking about comics this weekend anyway. I loved comics growing up and I like to feature some of the comics that were popular during the WWII. Comic are often such a measure of what is happening in the world.

And, sometimes, while reading a book for this blog, I come across things about WWII that I didn’t know and that take me by surprise. That’s exactly what happened while I was reading a mystery called The Girl is Murder by Kathryn Miller Haines. On page 36, the protagonist, Iris Anderson, 15, is reading an Archie comic book. Archie in 1942? The same Archie Andrews I read all those years later?

Archie was indeed a war-time creation, and Iris Anderson was probably reading Archie Comics #1, dated Winter 1942, on sale November 15, 1942, cost 10¢. But teenaged Archie’s first appearance, along with Jughead Jones and Betty Cooper, was actually a year earlier, in Pep Comics #22, dated Dec. 1941. It was a six page spread and introduced Archie as “America’s newest boyfriend.” 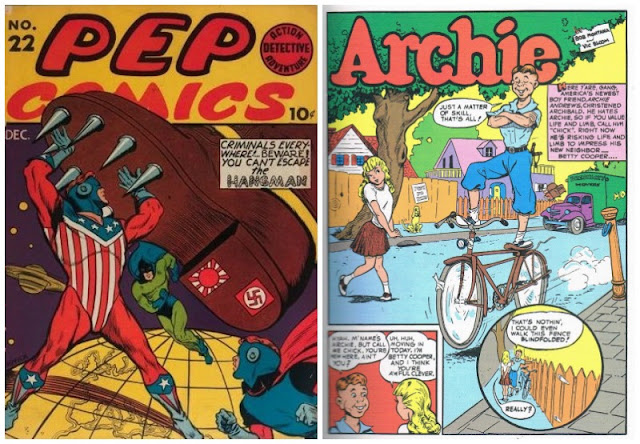 Archie lived in Riverdale, along with his parents Mary and Fred Andrews, and attended Riverdale High School. Archie’s infamous jalopy was introduced in Pep Comics #25, dated March 1942 and the very rich Veronica Lodge, middle-class Betty Cooper’s rival for Archie’s affections, was introduced in Pep Comics #26, dated April 1942. More characters were added over the first year, including Mr. Weatherbee, the school principal. Mr. Lodge, who raison d’être was to keep Archie and Veronica apart, and Archie’s other friend, Reggie Mantle. It is interesting that there is no mention of the Archie story in either of these Pep Comics. 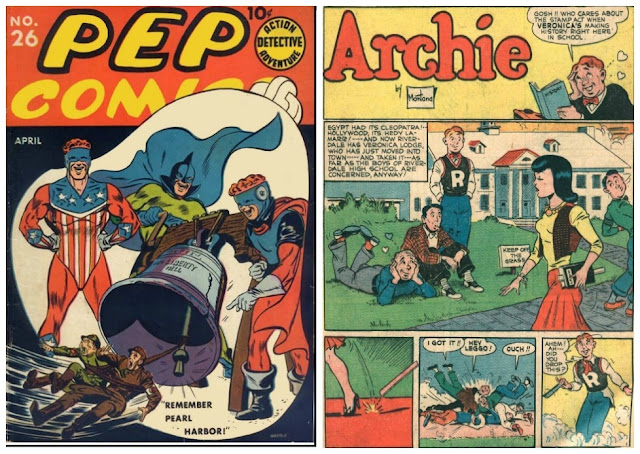 In 1942, with most of the characters in place, Archie got his own comic book, in which he was now billed as “The Mirth of a Nation.” The overall humor in Archie’s adventures is pretty much the same in these early comics and in the ones I read. And although he looked like a total doofus in the early Pep Comics and the first Archie Comics, his popularity continued to grow and his looks mellowed out somewhat.


Oddly, even though the Pep Comics of the early 1940s had superheroes fighting Nazis, Archie stories were apolitical. It wasn’t until he had his own comic that the war began to figure into some, though not many, of the stories. The first one I found is called “Pancakes in a Blackout.” When his parents go out for the evening, Archie decides to make himself a nice stack of pancakes, but then the air raid siren sounds and he has every light in the house on. Well, see for yourself: 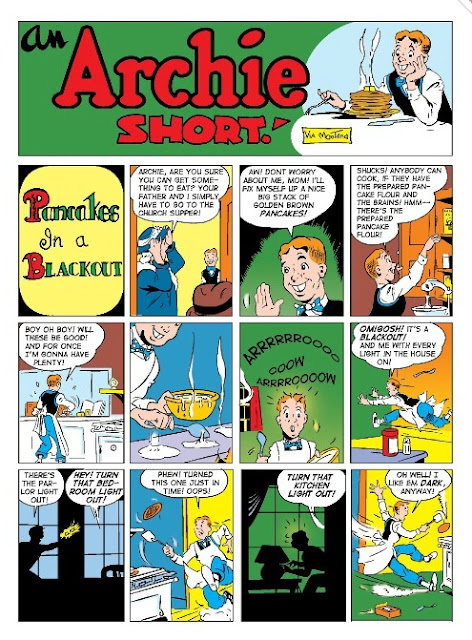 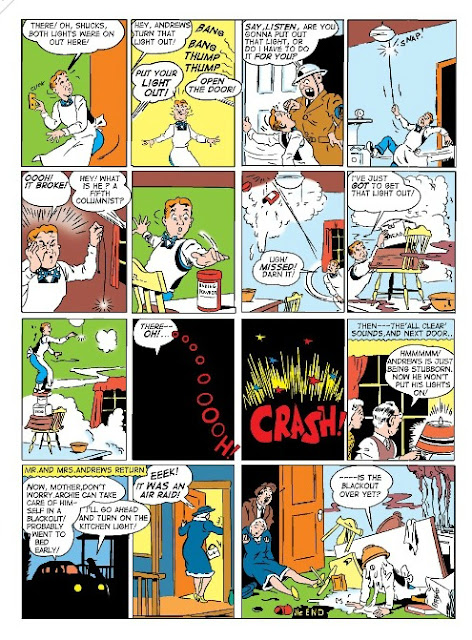 Archie has changed and evolved over time, but it's been fun revisiting those early days of Archie and the gang, and if you are like me, right about now you have "Sugar, Sugar" by The Archies running through your head.