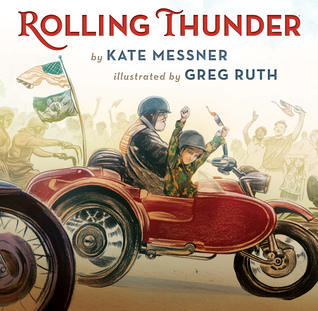 Early one morning, an excited young boy and his family board a train that will take them to Washington DC where they will meet up with the boy's grandpa. At the same time, grandpa is kissing his wife goodbye and hopping on his motorcycle, complete with side car, also heading to Washington DC.

It's Memorial Day weekend, time for the annual veteran's Ride for Freedom, and this year, our young narrator is riding with his grandpa, along with over a million other of the nation's veterans, all on their motorcycles. Grandpa is riding for friends Joe and Tom, lost in Vietnam, and his grandson is riding for his Uncle Zach, a pilot lost in a different war.

The weekend begins with camping out with all the veterans, and meeting the boy some of his grandpa's old friends:

Early next morning, everyone is up and ready to go, riding through the streets of Washington DC to honor all veterans and especially to bring awareness to people of those soldiers who are still MIA (Missing in Action) or POWs (Prisoners of War):

The Ride for Freedom ends at the Vietnam Veterans Memorial, also simply called the Wall, listing all the names of service members of the Armed Forces who fought and died in Vietnam, as well as those who are still considered to be MIA.  After finding Uncle Zack's name on the wall, and making a rubbing of it, there are speeches and more memory sharing by vets:

As the day draws to a close, it is clear that the Ride for Freedom is an important experience between this grandpa and grandson drawing them closer together in a very meaningful experience:

There are all kinds of books available that can teach kids about Memorial Day and its significance and they are certainly important. But I believe Rolling Thunder is the first book that to be written depicting this special group of veterans.

Messner has written Rolling Thunder in a telegraph-style rhyme, allowing for a great deal of information to be packed into a few well chosen words and she has done it well. The mixture of clipped words and slightly longer sentences also carries the sound of a motorcycle are it revs and rides. At the same time. it is a poignant and emotionally charged narrative.

And Greg Ruth has chosen a palette of bright oranges, warm reddish-browns, khaki and olive greens for his realistic illustrations that manage to to reflect the mood and feeling of the book perfectly.

One Memorial Day weekend, we were going to the house in Rehoboth Beach, Delaware and while waiting for the Cape May-Lewes ferry, suddenly the car was surrounded by motorcycles. It didn't take long to realize it was part of Rolling Thunder. The ferry hadn't arrived yet, so we socialized with the bikers while we waited and waved goodbye when the ferry docked in Lewes. This year marks the 30th year Rolling Thunder has been riding into Washington DC to keep the memory of POWs and MIAs alive in the hope of bringing them home someday. It has expanded to included POWs and MIAs from all wars that the United States has fought in.