If you know me at all, you know I love comics books and the funny pages in newspapers, especially from the Golden Age of Comics (1938-1950). You can see which ones I have posted about already by clicking on my page and Other Interesting Bits and scrolling down.

I was very excited to see that this coming July, Trina Robbins, a master cartoonist/comic writer and artist in her own right, as well as a historian of the genre and longtime feminist, has written a book about women in the comics during World War II. Here's what the publisher has to say about it: 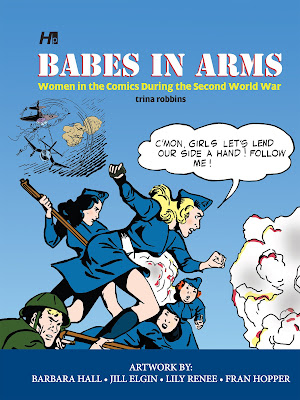 During the Golden Age of comics publishers offered titles supporting the war effort - presenting fighting men and their feminine counterparts - babes in arms! Comic books during this period featured US service-women fighting all of the axis bad guys and gave several of the most noteworthy women artists of the era opportunities to create action-packed, adventure filled four color stories. Now for the first time renowned pop-culture historian Trina Robbins assembles comic book stories from artists Barbara Hall, Jill Elgin, Lily Renee and Fran Hopper together with insightful commentary and loads of documentary extras to create the definitive book chronicling the work of these important Golden Age artists. This magnificent art book offers page after page of good girl action.