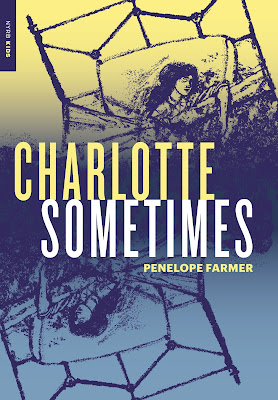 It’s 1963, and 10 year-old Charlotte Makepeace has just arrived at boarding school for the first time. After meeting her roommates, and setting up her bed by the window, Charlotte falls asleep that first night, apprehensive about what boarding school will be like.

The next morning, when she awakens, Charlotte is aware that things are different. Even though the dormitory and bed are the same, the view out the window isn’t. Charlotte has woken up more than 40 years earlier, in 1918, the last year of WWI. Not only that, but she is now called Clare by the other girls, including Clare's younger sister named Emily. No seems to notice that Charlotte isn’t Clare.

That night, Charlotte falls asleep in 1918 and wakes up in 1963, in her original room with her original dorm mates. This nightly switching places with Clare goes on every night for a while. Eventually, Charlotte and Clare start leaving notes for each other to help each other navigate their constantly changing situation.

Emily knows that Charlotte isn’t Clare and demands to know what is going on. Charlotte can’t explain it, but she does realize it has something to do with the particular bed she and Clare sleep in each night. Then, Charlotte finds out that Clare and Emily will be moving to new lodgings soon and will be walking to school each day. And though Charlotte and Clare make sure they are in their right time for the move, things don’t work out exactly as planned and Charlotte finds herself far from the magic bed that can return her to 1963, where she belongs.

There were a few things that I really liked about this book. First, the means of time-travel. It is simply a magic bed and occurs while sleeping during the night. To her credit, Farmer never even tries to provide an explanation about how or why it happens, it just does. Sleep and dreams can make anything feel possible, even time-travel. And night is, of course, a time when sleepers dream dreams occur that often make no sense even when they relate to the dreamer’s waking life.

I also like that Charlotte is so cool and calm on the outside, but on the inside she was a bundle of questions and concerns. And remarkably those questions aren’t necessarily about how and why she keeps waking up in different times so much as they were about her identity. Farmer has written that her intent was to question how… people identify you as you, and how they could accept one person as quite another (assuming the two people look reasonably similar to start with as Charlotte and her 1918 equivalent did)? Boarding school seems to have unsettled Charlotte's sense of who she is on the very first day, causing her ho write her full name on everything, as if to prove she is still really Charlotte Mary Makepeace. Right from the start “she had felt herself to be so many different people, and half of them she did not recognize.” Charlotte, already in an identity flux is an ideal candidate for a little time travel adventure and is easily being perceived as Clare by everyone except Clare’s sister, who naturally would know her better than most.

Interestingly also, the story is related only from Charlotte’s point of view. The reader only knows about Clare from the notes she leaves and from what Emily says about her, leaving me to wonder what the state of her identity was.

A word about WWI. This isn’t a war book per se, but the war does play a part. There is, of course, rationing, blackout curtains are in use, there's an army training camp nearby, and many of the girls are in boarding school because their fathers are fighting in the war, including Clare and Emily’s father.

I can’t believe that I haven’t read Charlotte Sometimes before now, but somehow it slipped under the radar. It is the kind of book I would have loved as a girl. The style is a bit on the dreamy side, with no big drama anywhere even though major things do happen - like getting stuck in the wrong time period. I’m actually glad I read it after having read lots of Angela Brazil’s book from the same time period, and which the style actually reminded me of.


Charlotte Sometimes definitely goes on my list of favorite time travel novels and I can honestly give it a high recommend.

This book is recommended for readers age 10+
This book is an EARC of a newly released paperback received from Edelweiss Plus
Posted by Alex at 1:32 PM