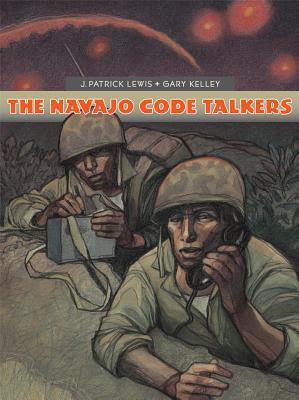 Often, when it comes to the history of this country, we focus on the heroic things that people have done to achieve certain ends and overlook things we don't like about them. Our founding fathers fought for America's independence while owning slaves of their own. Settlers braved the elements and other dangers as they pushed across the plains states, towards the west coast, unsettling and fighting the Native Americans who had lived there for centuries, and black soldiers fought valiantly in World War II to liberate Europe from a narcissistic, hate-filled dictator even as they were denied the same equality as their fellow white soldiers.

And sometimes our many heroes simply go unsung. But in this picture book for older readers, J. Patrick Lewis introduces us to a group of real true-life Navajo heroes of World War II. He begins by giving a little background history. The Navajo had lived for generations in the four corners where Arizona, Colorado, New Mexico and Utah meet, calling their land Dinétah. But in 1864, they were removed from their homes there by the United States government, and marched 350 miles to Fort Sumner, New Mexico.  Forever known as "The Long Walk" by the Navajo, it cost many Navajo their lives. It was four years before they were allowed to return to their tribal land, to their Dinétah.
Once home, many of the Navajo children were sent to Indian schools, away from family, traditions and culture, where they were forbidden to be Navajo, and to speak their language.  Punishment for speaking Navajo was harsh.

Flash forward to December 7, 1941 and the Japanese sneak attack on Pearl Harbor, forcing the United States to finally enter the Second World War. As with any war, there was a need for communication that couldn't be intercepted and deciphered by the enemy.  The Germans had their enigma machine, but what code could the Americans use that the Japanese couldn't figure out.

The Navajo language, that language that the government-run Indian schools tried so hard to eliminate, proved to be the perfect code. It was "unique, enormously difficult, and unwritten" the "ultimate unbreakable wartime code."

The irony that "suddenly, bilingual Navajos [have] become valuable" isn't lost in Lewis' account of the history of these code talkers.  He writes "Recruited into the military that once sought to destroy their ancestors, the 'code talkers' were born."

Lewis used spare, but lyrical text throughout this picture book history, relying on artist Gary Kelly's incredible pastel illustrations.  Kelly chose a fitting palette of dark earth tones to create both the images from the history of the Navajos and the scenes of war.

This is a beautifully done book by the same author and illustrator who did And the Soldiers Sang, about the WWI Christmas Eve truce between the Germans and British on the Western Front in 1914, and Harlem Hellfighters, introducing us to the brave and talented unsung heroes of the 15thNew York National Guard, which was later federalized as the 369th Infantry Regiment, soldier that the Germans dubbed the Harlem Hellfighters "because of their tenacity."

The Navajo Code Talkers could prove to be a useful addition to a unit on WWII, but it does have one major drawback. The story is told so generally that none of the original 29 code talkers are mentioned by name, making the overall impact of this book not quite as powerful as it could have been. Following the pattern of singling out one individual to give the story a deeper, more personal focus that was used in the other two collaborations would made this a more relatable story.  Still, it is important nevertheless.

There is some Back Matter for anyone interested in more information about the real code talkers, including Endnotes, Artist's Notes, and a Selected Bibliography.

If you are curious to know who the Navajo Code Talkers were, here is a list compiled and posted by the former student of Window Rock High School in Fort Defiance, Arizona.  Be sure to visit their website for more information.