The Tiger Who Would Be King by James Thurber, illustrated by Joohee Yoon 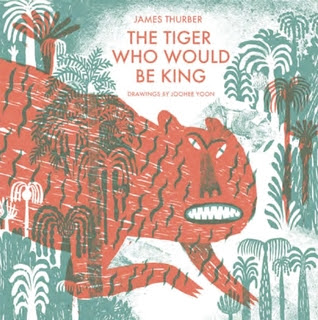 I always think of James Thurber as a humorist, but there is no real humor in his fable about the pointlessness of war.  The Tiger Who Would Be King was first published in The New Yorker on August 11, 1956.  He hadn't expected the story to be printed because it was considered too "savage" but Thurber himself felt that the violence in his story was OK since he believed that fables were not for children, anyway.  But, it was published and soon found it's way into school curriculum's.

The story is simple and the moral is clear, even before you read it at the end.  One morning, the tiger wakes up and announces to his wife that he is now the king of beasts. When his wife reminds him that the lion is the king of beasts, the tiger tells her that all the other creatures are crying out for change.

Later, when the tiger visits the lion to tell him about the change, a fight ensues between the two big cats.  Soon, all the other creatures are choosing sides and fighting with each other.  In the end, the tiger is the only survivor, but even his days are numbered now.  And the moral: you can't be king if there is no one to rule over.

The Tiger Who Would Be King is a picture book for older readers about the desire for absolute power, and the resulting war, and destruction.  Though Thurber's voice and intelligence can be discerned throughout the story, there is no real message of hope anywhere in his fable except perhaps in the mind of the reader who realizes that the choices we make can have serious consequences.

Artist/illustrator Joohee Yoon has taken Thurber's 60 year old story and given it a new stunningly expressive look.  Yoon's illustrations are hand and computer drawn with only two colors - green and orange which are boldly used on each page and leave much to the imagination.  At the center of the story, there is a 6 page climactic fold out that shows the fierceness of the fight that between the animals who supported the tiger and those who backed the lion.  In their boldness, the illustrations have captured not just the futility of war but also the brutality of it, making this an exceptionally effective picture book for older readers.

I think The Tiger Who Would Be King would pair very nicely with Dr. Seuss's Yertle the Turtle, another story about the desire for absolute power.