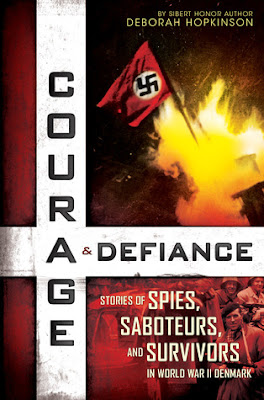 On April 9, 1940, the Nazis invaded Denmark.  Caught off guard, the Danish military was no match for the invading Germans, and the government easily surrendered.  At first, daily life continued almost normally, except for the constant presence of armed soldiers and gestapo everywhere.  But soon, things changed and for the next five years, the peaceful Danish people lived under the yoke of military domination, the constant threat of starvation, and for Jewish citizens, the very real prospect of deportation and death.  But not all Danes were willing to accept their country's surrender and submit to life under occupation and it wasn't long before ordinary citizens became clandestine resisters to the Nazis.

In her newest book, Courage & Defiance, Deborah Hopkinson once again uses her considerable talent  as a writer and researcher to explore the Danish resistance.  Looking at the Nazi occupation of Denmark in chronological order from the first days to the last, Hopkinson introduces the reader to some remarkable people and events.

There is, for example, Niels Skov, a 20 year old apprentice toolmaker, who found himself so surprised, angry and ashamed that people went about their business after the invasion, that he resolved to fight back.  The invaders may haven been mostly apprehensive young men like himself, but they were destroying everything Niels loved about Denmark.  And so, much like the boys in the Churchill Club, Niels began his resistance activities by roaming the streets of Copenhagen seeking out Nazi vehicles he could sabotage- blowing them up and setting them on fire.

Another story Hopkinson explores in detail is that of Jørgen Kieler, a 20 year old medical student who was also outraged by the invasion and ashamed and saddened by Denmark's easy capitulation to the Nazis.  Knowing he needed to do something to resist them, it wasn't until 1943 that Jørgen, his siblings and friends decided to write an illegal anti-Nazi underground newsheet, Frit Danmark, aimed a fellow students.  But soon, writing wasn't enough, and Jørgen became a saboteur as part of the Holger Danske 2 resistance group.

And Jørgen wasn't the only Kieler to act against the Nazis.  Hopkinson introduces readers to his sister Elsebet, who wanted to protest the occupation of her country, but was a pacifist.  When the rumors spread that there was going to be a roundup of Danish Jews, Elsebet, along with the Kieler's friend Klaus Rønholt, traveled around the countryside asking for donations from farms and landowners to help fund a rescue of as many Jews as possible.

And then there is Tommy Sneum, a flight lieutenant in Denmark's air force.  After Denmark's defeat, Tommy left the military and became a one man resistance plan.  Realizing the German's had some kind of early warning system in place around Denmark to warm if any enemy planes are approaching,   Tommy made it his business to find out where these systems were and get the information to Great Britain ASAP.

These are just some of the brave Danes that Hopkinson writes about in this compelling new work.  The book is so well-written and organized, not to mention thought provoking, that it reads as though it were a spy novel, except the people are real and the events really did happen.

Good nonfiction about people, places and events is always so welcomed when it is done well.  And I have been very fortunate to have read some truly remarkable nonfiction for this blog.  Deborah Hopkinson's (Knit Your Bit: A World War I Story) new book becomes a most welcomed addition to those already available.

Books about the resistance activities always begs the question can one person make a difference especially against such a large, powerful, well armed often unscrupulous force that made up the Nazi regime?   I suspect that the resisters you will meet in Courage & Defiance as well as the 7, 220 Jews who were able to escape Denmark with their help just before the Nazis would have rounded them up for deportation would have to say that yes, one person can and did make a difference. 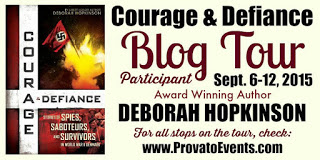 This book is recommended for readers age 9+
This book was provided by the publisher through Edelweis Above The Treeline
Posted by Alex at 1:00 AM