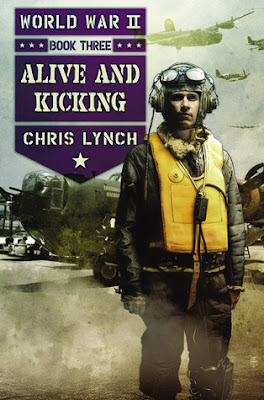 In Dead in the Water, the second book in Chris Lynch's WWII series, brothers Hank and Theo McCallum went off to enlist, Hank in the Navy and Theo in the Army Air Corps, but that novel focused on older brother Hank's experience in the Pacific, eventually finding himself on the USS Yorktown at Midway Island.  So I figured the next book would be about Theo's experience flying bombers.

And it is and it basically picks up where Dead in the Water leaves off.  The McCallum family has received notice the Hank has been declared MIA ever since the sinking of the Yorktown at Midway (I'm sorry if this is a spoiler for you), and Theo is on his way home on compassionate leave.  Though the family is sure that Hank is dead, Theo can't believe that and has convinced himself that because he is MIA, it's just a question of time before he is found alive somewhere.  It makes for a very awkward visit home, and Theo can't wait to get away.

Shortly after returning to his base in Oklahoma, Theo and his unit are sent to an RAF base in Shipham, Norfolk, England.  This will be their base of operations for flying raids over Eurpope.  Theo is a nose gunner on a B-24 Liberator, the youngest member of the crew and because of his interest in baseball and having played some minor league ball in Maryland, they name their plane, rather tongue in cheekish, the Batboy.

Even while holding out hope that his brother will be found alive, Theo and the crew of Batboy fly dangerous daytime bombing raids over occupied France, bombing Hitler's steelworks, engineering factories, and railroad manufacturing.  Theo also keeps Hank alive when he begins to keep a journal of what he experiences are, hoping that his brother is doing the same thing, with the intention that at wars end, they can read each other's journal.

Theo sees a lot of action, winning awards, citations and medals for his part in fighting the Nazis and has proven himself to the quite the soldier.  The book ends with a journal entry to Hank on June 6, 1944.

Alive and Kicking started off a little slowly for me.  It did pick up after Theo returned to his base, but no by much.  I thought that his strong attachment to his older brother acted as a distancing factor, so I never felt that Theo connected with the other men who were part of the Batboy's personnel for all his called them his brothers.

I also found that I couldn't situate myself timewise as I read the story.  I had no real sense of time passing, yet the novel covers almost two years -  the Yorktown was sunk June 7, 1942 and Theo's last entry in his journal is June 6, 1944, which happens to be D-Day.

So, I have to be honest and say that out of all the Chris Lynch books I've read so far, this is probably my least favorite.  I found it to be a bit short on plot and dialogue, and way too long on Theo's repetitive monotone inner dialogue.  A book like this needs to be action oriented and, while there was action, it was all filtered through Theo's thoughts.

There was a lot of good information about gunners and the B-24 Liberator (and I have to confess, since I'm not a military buff, that one bomber is basically the same as another to me), which I actually found interesting.  So much so, I actually looked up information on B-24 Liberators and found this:

There is one more book left in Lynch's World War II series, The Liberators, which I am still looking forward to reading, despite not caring much for Alive and Kicking.

This book is recommended for readers age 11+
This book was sent to me by the publisher, Scholastic Press