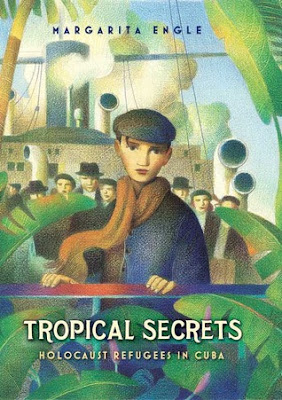 This free verse novel, written from a first person perspective by three separate and distinct voices, introduces the reader to Daniel, a 13 year old German Jewish refugee who held the hand of his grandfather as he died on Kristalnacht; Paloma, the 12 year old daughter of a corrupt Cuban official who determines, for a high price, who gets a visa to enter Cuba.  Paloma also works at a shelter to help the refugees adjust to their new surroundings; and David, an elderly Russian Jew who fled his country in the 1920s because of pogroms and with whom Daniel is able to communicate in Yiddish.

The novel begins in June 1939 and, as each of these three characters tell their story, the reader also learns that Daniel's parents are musicians who decided to save Daniel because they could only scrape together enough money to pay for one ticket on a ship and send him away from the Nazis.  It was his and their hope that they would be reunited in New York someday.

Paloma, ashamed of her father's abuse of power and the high price he charges desperate people for a visa, works with the American Quakers in Cuba to help people find shelter and provide them with food and clothing more suitable to a warm climate.

David, who hands out ice cream and food to the refugees with Paloma, befriends Daniel and convinces him to take off the heavy winter coat he brought from home, and metaphorically shedding his old life.  Over time, Daniel, David and Paloma become friends and David helps Daniel begin to move on with his life, though never forgetting his parents.

In December 1941, when Japan attacks Pearl Harbor, paranoia that Germany has sent spies to Cuba increases and the Cuban government orders all non-Jewish Germans to be arrested.  The three friends watch husbands and wives torn from each other because one spouse is Jewish and the other is Christan, and think of the oldest couple in the shelter.  Having crossed Europe together, hiding from Nazis any way they could, Miriam, a Jew, and Marcos, a Christian, are about to be separated in what should have been their place of safety.  Are Paloma, Daniel and David willing to risk everything to help this elderly couple hide from the police?  Does the fear of German spies mean that ships from Germany will now be turned away from Cuba?

Despite being written in free verse, each one of three characters begins to really come to life as they tell their thoughts and secrets and share the different obstacles they must face and overcome, but each is also willing to do what they can to help others in the difficult times and circumstances they find themselves in.

This is the fourth book I've read about the experience of Jews fleeing Europe and Hitler's cruelty, seeking refuge in Cuba.  This book covers a three year period, from June 1939 to April 1942.  Read carefully, because Engle packs a lot of information about life in Cuba during that time as the characters speak.  There is both corruption and kindness to be found, as well as the anti-Semitic propaganda campaign launched by Germany in Cuba; the eventual turning away of other ships and forcing them to return to Germany and death, and the rounding up of Christians married to Jews and believed to be spies.  Engle includes that and more in her spare, yet graceful poetic style.

There are a lot of excellent stories written about the experience of people during the Holocaust, but not many about the experience of Jews and Cuba.  Books like Tropical Secrets give us another side of what life was like for Jews living under Hitler and their desperate attempts to escape - sometimes successfully, sometimes not.  Ships like Daniels continued to be turned away from the US and Canada, and even though Cuba eventually did the same, it did provide a relatively safe haven for 65,000 refugees.

Be sure to read the Author's Note at the end of the book to learn more about Cuba in WWII.

A reading guide can be downloaded HERE