It's Super Bowl Sunday - a good day for blogging, making my Super Bowl Sunday chili and watching…Downton Abbey.  But this morning has also been a good time to straighten up my book shelves, which hasn't been done in a long, long time.  As I was working, I came across two little books published by Whitman - they really are little, only 3 5/8" X 4 1/2".  One is called Skeezix Goes to War (1943) and it's based on daily comic strips that ran in the newspapers in 1942-1943.

I probably bought it because Gasoline Alley has been one of my favorite comic strips ever since I first started reading them, but it has been around for a lot longer than my lifetime.  It officially began November 24, 1918 in the Sunday funnies of the Chicago Tribune, in a feature called The Rectangle, written and drawn by Frank King:

But almost a year later, as it became more popular, Gasoline Alley became it's own a daily strip on August 25, 1919.  It was was originally about a group of friends interested in cars, and appeared in the Automobile section of the Chicago Tribune.  Beginning on December 22, 1919, however, Gasoline Alley started to focus on a character named Walt Wallet, a rather rotund bachelor who had served in World War I but the center of interest of the strip was still tinkering with cars.

It was an appealing comic strip, and began to gain in popularity, but not with women.  The Chicago Tribune wasn't happy about that and told King to do something that would make Gasoline Alley appeal to women. So, on February 14, 1921, Walt Wallet is awakened by his doorbell ringing in the middle of the night:
Walt discovers a week old abandoned baby on his doorstep, who he eventually calls Skeezix and adopts, though Skeezix always refers to him as Uncle Walt.  Now that Skeezix was introduced into the strip, Gasoline Alley began to focus less on things automotive and more on things domestic, becoming a really family-orientd comic strip appealing to everyone now, not just men.

What set Gasoline Alley apart from most comic strips from the beginning is that the characters not only develop unique personalities, but they also grow up and grow old, giving it a real-to-life feeling.  In 1926, when Skeezix is 5 years old, Walt marries his girlfriend Phyliss Blossom.  Later, in 1928, they have a child nicknamed named Corky, and 1935, they adopt another orphan, Judy.  Meanwhile, readers are watching Skeezix grow up:

After graduating from high school in 1939, Skeezix gets a job, and continues going out with high school girlfriend Nina Clock.  But on December 7, 1941, the United States is attacked and enters World War II.  The now 20 year old Skeezix knows it only a matter of time until he is drafted, so on January 16, 1942, he enlists in the army, but not before asking Nina to marry him:


To be continued: Skeezix Goes to War 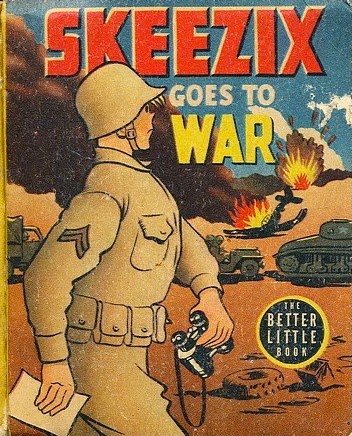