Hunt for the Bamboo Rat by Graham Salsibury 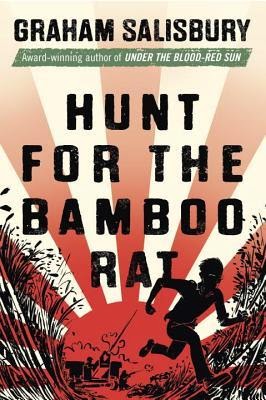 Zenji Watanabe is 17 years old in the summer of 1941, a Nesei born on Honolulu to Japanese parents.  Naturally, he is fluent in both Japanese and English.  He has also just graduated from high school and is thinking about studying Buddhism in Japan, Meanwhile, he was working to help support his family - mother, older brother Henry, younger sister Aiko, father deceased.

All that changes when Zenji's JROTC commanding officer Colonel Blake shows up at his house one day.  He wants Zenji to be interviewed and tested, but for what?  To travel to the Philippines to translate some documents from Japanese to English.

But when Zenji arrives in Manila, he is instructed to stay at the Momo, a hotel where Japanese businessmen like staying, to befriend them and keep his ears and eyes open.  He is given the key to a mail box that he is required to check twice a day to be use for leaving and receiving information and instructions.  Zenji is also given  a contact person, Colonel Jake Olsten, head of G2, the Military Intelligence Service, and even a code name - the Bamboo Rat.

In December 1941, the Japanese bomb Pearl Harbor and the war in the Pacific begins.  It isn't long before the Americans are forced to withdraw from Manila.  Zenji chooses to remain, giving his seat on the last plane out to another Japanese American with a family.  Not long after that, he is taken prisoner by the Japanese, who torture and threaten him trying to make him admit he is the Bamboo Rat, and considering him a traitor to his county - Japan.

Eventually, the Japanese give up and Zenji is sent to work as a houseboy/translator for the more humane Colonel Fujimoto.  Fujimoto seems to forget that Zenji is a prisoner of war, and begins to trust him more and more.

By late 1944, it's clear the Japanese are losing the war in the Pacific.  They decide to evacuate Manila and go to Baguio.  Even though food is in short supply, Zenji starts to put some aside for the day he may be able to escape into the jungle and wait for the war to end.

But of course, the best laid plans don't always work out the way we would like them to and that is true for Zenji.  Will he ever make it back to Honolulu and his family?

WOW! Graham Salisbury can really write an action-packed, exciting and suspenseful novel.  Salisbury was born and raised in Hawaii, so he gives his books a sense of place that pulsating with life.  Not many authors explore the Japanese American in Hawaii experience during World War II and not many people realize that they were never, for the most part, interned in camps the way the Japanese Americans and Japanese Canadians on the west coast of the US and Canada were.  And although Hawaii was only an American territory until it became a state in 1959, if you were born there, you had American citizenship, just like Zenji continuously tells his Japanese captors throughout Hunt for the Bamboo Rat.

At first, I thought Zenji was too gentle, too innocent and too trusting for the kind of work he was recruited to do, which amounted to the dangerous job of spying.  But he proved to be a strong, tough character even while he retained those his aspects of his nature.  Ironically, part of his survival as a spy and a POW is based in what his Japanese Buddhist priests had taught him before the war.

One of the nice elements that Salisbury included are the little poems Zenji's mother wrote.  Devising a form of her own, and written in Kanji, it is her way of expressing her feelings.  They are scattered throughout the book.  Zenji receives one in the mail just before the bombing of Pearl Harbor and keeps it with him as long as he can, deriving comfort from it.

Like the first novel I read by Salisbury, Eyes of the Emperor, one kept me reading straight through until I finished it.  It is the fourth novel in his Prisoners of the Empire series, and it is a well-crafted, well-researched story, but it is a stand alone novel.  Zenji's story is based on the real wartime experiences of Richard Motoso Sakakida.

True to form, Salisbury brings in a lot of history, along with real people and events, but be careful, fact and fiction are seamlessly woven together.  He also includes the tension between the Filipino people and the Japanese after the Philippines are occupied by the Japanese and the cruel treatment of the Filipino people.   And included is the tension between Chinese and Japanese in Hawaii because of the Nanjing massacre of Chinese civilians in 1937/38.

All of this gives Hunt for the Bamboo Rat a feeling of authenticity.  There is some violence and reading the about Zenji's torture isn't easy, so it may not appeal to the faint at heart.

Hunt for the Bamboo Rat is historical fiction that will definetely appeal to readers, whether or not they particularly enjoy WWII fiction. And be sure to look at the Author's Note, the Glossary and additional Resources at the end of the novel.

This book is recommended for readers age 12+
This book was purchased for my personal library
Posted by Alex at 8:20 AM