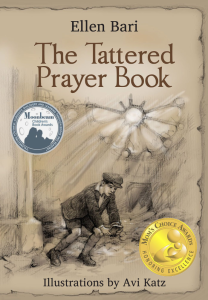 When young Ruthie finds a tattered prayer book in a box of old photographs marked Germany in her grandmother's house, she gets quite a surprise.  The prayer book in written in Hebrew and German and had apparently been burned.  Even more surprising - her grandmother tells Ruthie that the book came from Germany and it belongs to her father.

When Ruthie asks her dad about it, he tells her that he was born and lived a happy life in Hamburg with his family, and with lots of cousins and friends.  But, when the Nazis took over the government in 1933, all that changed.  Soon, Jews weren't allowed in restaurants, movie theaters, libraries, schools.  Old friends became instant bullies.

Then, in November 1938, Nazis began a night of destruction, Kristallnacht, destroying Jewish business and synagogues, setting them on fire.  When Ruthie's dad saw what was left of his synagogue, he also saw burnt prayer books all over.  He reached for one and hid it in his coat - a reminder of the place where he had once been so happy.

One day, while he and his father were in a shop, Nazis came down the road probably to arrest the men.  Ruthie's Grandpa slipped out the back door, while her dad ran home to tell his mother what happened.  Days later, Grandpa came back home and told his family he had to leave, sailing for America with his son Fred.

Every night, her dad opened his burnt, tattered prayer book and prayed.  Finally, in June 1939, visas arrived for Ruthie's dad, mother and brother Sid.  Other friends and family members were leaving Germany, too, for Argentina and Israel.  Others, sadly, had to remain in Germany.

On board the ship, after the Sabbath candles were lit, Ruthie's dad showed the prayer book to his mother, expecting her to be angry, but she wanted it to be a reminder of the good life they had had in Germany and a source of strength for the future.

Recalling what happened so long ago in his life in Germany, after making such an effort to forget it all, Ruthie's father realizes how important that burnt, tattered prayer book had been to him and how much what it symbolized is an important part of himself.

The burnt prayer book is a symbol of both the happy, good life Ruthie's dad and his family shared before the Nazis came to power, and at the same time, the terrible years that followed.

Often, when we talk about the Holocaust, it is about the mass roundups of Jews, the death camps they were sent to, and the attempt to systematically destroy an entire race of people.  But nothing happens in a vacuum and neither did the Holocaust.  Between the years 1933 and 1938, Jews were subject to all kinds of degrading treatment by Hitler's henchman in the SA and the SS, and by ordinary citizens who turned their backs on friends overnight.

In The Tattered Prayer Book, Ellen Bari has written an informative, but gentle picture book for older readers (age 7+) about those deplorable years in a way that kids will definitely understand.  It is an ideal book for parents who wish to introduce their children about the Holocaust themselves before they learn about it in school.  Teachers, however, will also find it to be an excellent book for teaching the Holocaust, as well.

The illustrations by Avi Katz are done in sepia-tones that are reminiscent of old photographs and burnt paper, again reflecting that balance of good and bad times that the prayer book represents.