The Boy Who Dared by Susan Campbell Bartoletti 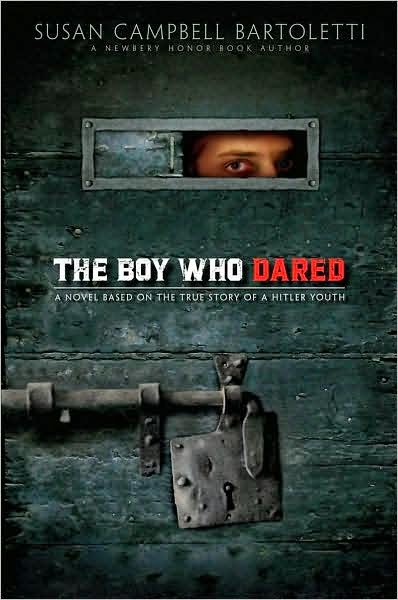 This novel opens on October 27, 1942.  Helmuth Hübener, 17, has been imprisoned on death row in Plotzensee Prison, Berlin, charged with high treason against the Third Reich.  He had hoped the court would show lenicency because of his age, but that hope was now gone.  Sentenced to death, Helmuth recalls, in a series of flashbacks, the events in his life that led him to this day.

As a young child living in Hamburg, Helmuth hears his grandparents talk about their dislike of the Nazis and their leader, Adolf Hitler and Opa's predictions that Hitler wants war.  But Helmuth likes playing with his toy soldiers and thinks maybe he will be a soldier when he is old enough to fight.

But when Hitler seizes power in 1933, Helmuth sees everything around him change.  Teachers and schoolmates show their support for the new chancellor and begin harassing the Jewish students, Germans are told to boycott Jewish stores, enforced by SS and SA destroying their businesses.  Un-German books and movies are forbidden, and Helmuth is afraid that means Karl May's beloved stories about America's wild west, until his brother Gerhard tells him they are Hitler's favorites, too.

In 1935, Helmuth's mother begins seeing a Nazi named Hugo Hübener.  Hugo changes everything in their home and after the two marry, moves the family away from Opa and Oma.

In 1938, at age 12, Helmuth begins a new school, where he is immediately labelled a troublemaker by his teacher, a Nazi.  He is punished by having to write an essay with the title "Adolf Hitler: Savior of the Fatherland."  Helmuth knows he must bite the bullet and write the essay his teacher expects and in the end, even his teacher has to admit that he is a talented writer.  Helmuth is also required to join the Jungvolk, the younger version of the Hitler Youth.

When his older brother Gerhard is inducted into the army in 1939, he is sent to Paris for training.  Once the war begins, Helmuth suspects that the Reich's radio is not giving the German people the truth about what is going on.  When Gerhard returns from France, he bring a new forbidden short wave radio back with him., but hides it and tells Helmuth to leave it alone.  At first, Helmuth resists the temptation to listen to it, but after a while he can't resist any longer and each night, sets up the radio to hear the BBC broadcasts done in German.  And just as he suspected, the German people are indeed being lied to about German successes in the war.

Helmuth, who is a devout Mormon and who practices his faith throughout, convinces his two best friends from church, Rudi Wobbe and Karl-Heinz Schnibbe, to help him create leaflets transcribing the BBC broadcasts to be distributed all over Hamburg.

Helmuth, Rudi and Karl are turned into the Gestapo by a supposed friend, put on trial and sentenced. Helmuth is the only one sentenced to death for high treason.  He had promised Rudi and Karl he would  take full responsibility, so they were only sentenced to imprisonment for a few years (which were shortened more when Germany lost the war).

It is through the flashbacks, that Bartoletti skillfully shows us Helmuth's development from a child who enthusiastically  supports the Nazis to an adolescent who critically questions what he sees going on around him to a courageous young man willing to risk death in order to tell people the truth about Hitler and the Nazis.  It makes for a very powerful story.

The Boy Who Dared is historical fiction based on a true story and is one of the reasons why Helmuth's story is so compelling.  I think that it is important for today's readers to understand that not everyone in Germany supported Hitler and his politics, but so many chose to remain silence about their feelings, like Helmuth's mother who told him that silence is how people get on sometimes. (pg 95)  In fact, we never really know how Helmuth's mother really feels.  She married a Nazi, but her family was basically against Hitler.

At the back of the novel, there are photographs of Helmuth, his friends and family, as well as an extensive, not to be skipped over Author's Note explaining how Bartoletti researched the novel and the people she interviewed.

Helmuth was the youngest resister of the Third Reich to be executed.  His story really makes you stop
and think about whether or not you might have had the kind of courage of your convictions that Helmuth had.  Did his actions impact anyone who knew him or read the leaflets he wrote?  Except for his stepfather, Hugo, who did become a changed man after Helmuth's execution,we will never know, but hopefully Helmuth's story will inspire others to find courage within themselves to speak out against injustice and lies regardless.

If you are moved by The Boy Who Dared, and would like to know more about what life was like for young people like Helmeth during the Third Reich, then be sure to look at Susan Campbell Bartoletti's excellent nonfiction book Hitler Youth: Growing Up in Hitler's Shadow.

This book is recommended for readers age 9+
This book was purchased for my personal library
Posted by Alex at 12:14 PM