Playing for the Commandant by Suzy Zail 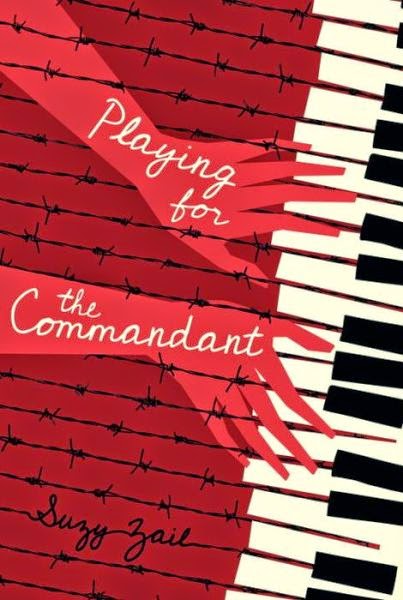 In spring 1944, Hungary was occupied by German soldiers and in the city of Debrecen, a ghetto was formed at the end of April.  Thinking her family was lucky because their apartment fell within the walls of the ghetto, Hanna Mendel continued to believe she would be able to attend Budapest Conservatorium of Music, where she had just been selected for a hard won place as a piano student.

But in the middle of a night in June 1944, a knock on the door by officers informed them that the Mendel family,  parents, high-spirited, defiant older sister Erika and Hanna, 15,  was ordered to assemble outside the synagogue at 8 the next morning.   Before leaving, Hanna rips the C-sharp from her beloved piano and takes it with her.  The next morning the Mendels, along with all of Debrecen's Jews, begin their long trip to Auschwitz-Birkenau Concentration Camp.

Once they arrive at Auschwitz, the family is split up, but luckily Hanna, Erika and their mother are able to stay together in the same barrack, even sharing a bunk.  Put to work in the quarry, one day Hanna sees her music teacher playing piano with an ensemble made of up inmates and called the Birkenau Women's Orchestra.  Piri thinks that maybe she can get Hanna a place in it.

When that doesn't work out, Hanna is sent to audition with five other inmates for the camp's cruel commandant.  Believing she doesn't stand a chance at being chosen, the commandant leave the choice to his totally disinterested son, Karl Jager, who points to Hanna.

Day after day, Hanna trudges to the commandant's house to await the order to play for him and any guests he may have.  The only perks to playing for the commandant is a warm shower everyday (the commandant detests dirt), shoes, a warm coat and a warm house while she's there.  The only extra food is leftovers she must steal and risk getting caught and shot.

Gradually, however, she discovers that Karl Jager harbors his own dangerous secrets and is not as disinterested or as indifferent as she originally thought.  When he treats her kindly, Hanna finds herself more and more attracted to him.  But returning to the barrack at the end of each day, she sees that her mother and Erika are cold, starving and barely surviving.  To make matters worse, her mother, who had started going mad during the roundup in Debrecen, is having more and more trouble surviving the selections each time they are done.

Their one hope is that the Red Army is really moving east as rumored around the camp and that they arrive in time.

Playing for the Commandant is certainly a very readable book.  I read it in one day.  It is told in the first person by Hanna, a very observant 15 year old and on many levels her voice rings true.  Her descriptions of the camp, of the cruelty inflicted on innocent people are spot on.  When she talks about the lice, the smells, the moldy bread or about how skeleton thin her sister and the other women are becoming, you can clearly see and smell what she is describing.

Despite everything, Hanna'a father had told her to survive at any cost to tell the world what happened to the Jews of Europe and so, she is determined to do what her father wanted.

But when she talks about the danger of stealing scraps of leftover food, or of  living under the pressure of always having to please the commandant, Hanna's fate feels just as capricious or dangerous as her fellow inmates.  For example, when the gardener, a Jew, steps on the grave of the commandant's dog, he is shot in the head for it.  But, when a girl at the commandant's house drops a tray with tea and cakes on it, I thought for sure that when she is removed from the house, she is also killed, but she shows up later, and I have to admit, I was surprised to see her again in the novel.

But, Hanna's growing romance with Karl is very most disturbing and a real flaw in the novel.  I guess I thought Hanna should be thinking more about food than a boy.  She didn't get that much more to eat than her sister, and what she got, she shared with Erika.  Also, at one point, Hanna gets angry at the people, ordinary farmers, who watch her walk to and from the commandant's house every day and do nothing.  I got mad at Karl for being against what the Nazis were doing to the Jews, but who passively sits by and watches it all happen.  I would be curious to know how others feel about this part of an otherwise good novel.

Yet, despite this criticism, in the end, I thought that Playing for the Commandant is definitely worth reading for its message of survival and hope, but not for its gratuitous romance.

Though Playing for the Commandant is a complete work of fiction, Jews actually were often used to play music for the Nazis.  Here is the obituary of Natalie Karp, a famous pianist who played for Amon Goeth's birthday on December 9, 1943.  She and her sister allowed to live because of the beautiful piano playing that night.  Goeth was the cruel commandant of the Kraków-Plaszów Concentrtion Camp in Poland (you may recall Goeth from Schindler's List).

Email ThisBlogThis!Share to TwitterShare to FacebookShare to Pinterest
Labels: Auschwitz, Holocaust, Music, YA