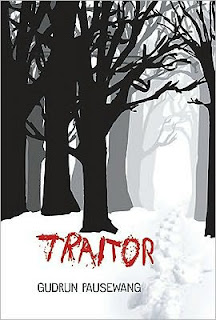 Traitor begins in the winter of 1944. Anna Brünner, 16, lives in Stiegnitz, a small village, with her mother and grandmother, not exactly Nazi supporters, and her younger brother Felix, member of the Hitler Youth and completely indoctrinated in National Socialist dogma. Older brother Seff is fighting at the Eastern front. Anna's father, Felix Brünner, had been a conjuror with a traveling circus before marrying her mother, and had committed suicide when Anna was still a baby.

During the week, Anna goes to school in Schonberg, living in an attic room rented from a widow, and coming home every Saturday afternoon to Sunday afternoon.

While walking home from the train station, Anna notices some odd footprints in the snow. Becoming curious, she follows them all the way to her family’s barn. Climbing up into the hay loft, Anna finds a sleeping man lying there, wet and emaciated.  Anna assumes that he is an escaped patient from the nearby mental asylum, but at home, her grandmother tells her about eight Russian POWs who had escaped in the area. Seven of them were found and shot on the spot. Anna naturally assumes that the man in the barn is the last missing Russian, but still feels sorry for him.  She tells her grandmother that she thinks she is getting a cold and is given a jug of steaming milk and told to go to bed. Naturally, Anna sneaks it out to the hay loft and gives the milk to the man.

Anna continues to think about this man and before returning to school on Sunday, she givess him clean, dry clothes, some food and takes him to the Moserwald Bunker, a large complex that had been used for defense at one time, but has long since been abandoned. Using hand motions, she explains that he must stay there or he will be caught. With the help of a calendar, Anna indicates that she will return the following weekend.

Although Anna knows it is treasonous to help the enemy, she continues to bring the Russian, whose name is Maxim, more clothing and food. After giving him her older brother’s clothes, Anna becomes afraid that they can be traced back to her if Maxim if found. As Anna becomes increasingly stressed by this, her landlady, Mrs. Beraneck, notices and, knowing she is not a supporter of the NS regime, Anna finally confides in her that she is hiding Maxim. Just before Christmas vacation, Anna find clothing, toiletries and some kitchen utensils in her room for Maxim, left there by Mrs. Beranek.

The police have by now basically given up their search for Maxim. By now, the war is not going well for the Germans and the Russian Army has been pushing westward, getting closer and closer to Stieglitz. Anna’s brother Felix, however, has been watching her closely and following her when she goes to visit the bunker. He finally confronts Anna, telling her that he thinks she is hiding the prisoner and reminding her that that is treason, punishable by death. She explains that she goes to the bunker to be alone and write poetry. He accepts this explanation with skepticism.

Traitor is a taut, psychological novel, full of the kind of suspense that grips the reader, making it impossible to put the book down. It relies, for the most part, on Anna’s thoughts to move the narrative forward, so the reader can see the interesting play of what she thinks and what she does. It had me on the edge of my seat the whole time I was reading. There seemed no possibility that this story of Anna and Maxim could have any kind of good resolution. But as the Red Army gets closer, a good outcome seems to become a possibility. Still, the ending was not what I was expecting at all. Not one of the possibilities for a positive or negative ending that occurred to me prepared me for what does happen. But I leave it at that.

Traitor is so well worth reading and I highly recommend it. I think Anna dilemma and her actions, coupled with the way the author builds up the tension, would be very appealing to teen readers. Often translations are not as good as the original because, as they say, something gets lost. But Rachel Ward has done a great job capturing the deveolping warm relationship between Anna and Maxim in an otherwise cold and impersonal landscape that reflects the militaristic society the Nazis were so good at creating. They say you should write what you know and the Sudetenland under Nazi domination is something that Gudrun Pausewand would know about firsthand. Pausewang was born there in 1928 and spent her youth living under Nazi rule until fleeing with her family from the advancing Russian army in 1945.

This book is recommended for readers age 12 and up.
This book was borrowed from the Grand Central Branch of the NYPL

Another review of Traitor may be found at Bites
Posted by Alex Baugh at 10:31 AM