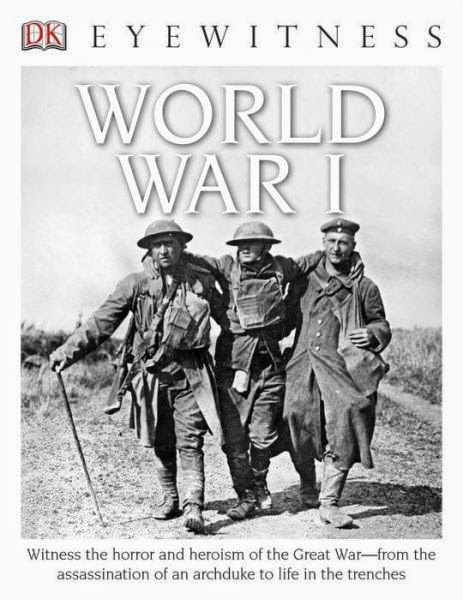 Today marks the 100th anniversary of the start of World War I.  I have to be honest and say this I don't really know much about this war except what I learned in school, or from a few books I have read.  And I have always felt that when your knowledge is lacking on a particular topic, begin learning about it by looking at a good overview, then you can look more closely at particular areas that might be interesting to you.

So, when I realized this anniversary was coming up, I decided to begin with one of DK's Eyewitness books.  Eyewitness World War I begins with an introduction to Europe at the beginning of the 20th century, explains who the major powers were and well as the major conflicts that created alliances that would prove to be important in 1914 and the beginning of World War I.

The war was a result of the assassination of Archduke Franz Ferdinand, the heir to the Austro-Hungarian throne.  He was shot in Sarajevo, Bosnia.  Bosnia was claimed by Serbia, so naturally Austria-Hungary blamed Serbia for the assignation and declared war on them on July 28, 1014.  Immediately, countries began to chose side - Germany supported Austria-Hungary, Russia supported Serbia, France supported Russia, then Britain declared war on Germany for invading Belgium.  The US didn't enter the war until April 6, 1917.

Each important aspect of the war is cover, usually in two page spreads, with lots of photographs supporting the text.  Readers will learn about how people signed up to fight, the most important battles, the role of women, the use of air power for the first time in a war:


Other topics included are Life in the Trenches, the War at Sea, and the use of one the worst weapons of this war - the Gas Attack.  I have always been interested in spying and code breaking, so I was happy to see pages devoted to Espionage:


World War I made good use of carrier pigeons, using up to 500,000 of them according to this page of the book, for espionage and often for sending messages from behind enemy lines.

Back matter to Eyewitness World War I includes more facts, a Q&A, a list of important people and places, where to go to find out more, places and websites to visit, a Glossary and in Index.

If you have a young reader developing an interest in war books, Eyewitness World War I would be a good introduction for them.  And if you are a classroom or home schooling teacher, this is one you will definitely want as a resource for students.  I use my Eyewitness World War II book all the time, and kids really like all the photographs of what people and things looked like.  I'll be placing Eyewitness World War I with it for their use, since WWI is on the agenda for the next next year.

It's Nonfiction Monday, be sure to visit today's Round Up of other nonfiction books for kids and teens