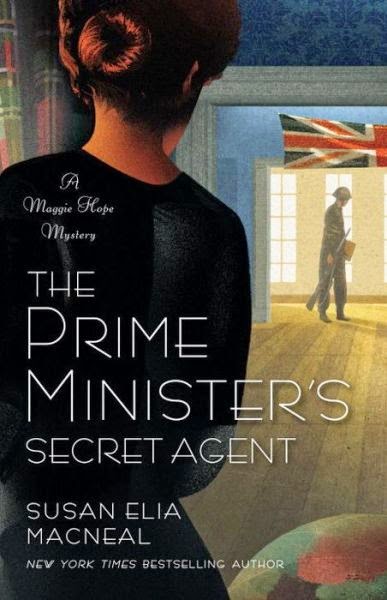 Maggie Hope is back!  As you may recall, Maggie is a Brit who was raised by her aunt in the U.S. after her parents alleged death in a car accident.  After graduating from Wellesley with a degree in mathematics, Maggie went to England to sell the house she had inherited from a grandmother she didn't know existed.  While there, World War II started and Maggie stayed in England to do her bit for the war.  Oh yes, and she found out her parents were still alive.  Her father, Edmund Hope, is a codebreaker at Bletchley and her mother, Clara Hess, is a Nazi spy.

In this fourth book of the Maggie Hope Mystery series, it's autumn 1941 and Maggie is back from her mission in Berlin, Germany, living in Asisaig, Scotland, training SOE (Special Operations Executive) agents for spying operations in France and Germany, while she tries to heal herself own broken body and spirit.  Maggie Hope has serious PTSD.

Early one morning, after sending her trainees off on a rocky run along the shore, Maggie spots a dead sheep with open, oozing black sores.  Later, when she is in Edinburgh to see her friend Sarah Sanderson in a dance performance, the lead ballerina collapses and dies on the stage, with the same kind of black sores that the sheep had.  Soon, another dancer and her friend Sarah are also hospitalized, deathly ill and with the same sores.  Jolted out of her depression, Maggie determines to get to the bottom of what is causing this.  The case is solved quickly enough, but Maggie is none too happy when she discovers in the course of her investigation that the government is experimenting is some unusual secret weapons.

At the same time, Maggie's mother is a prisoner in the Tower of London and has been sentenced to execution on December 7th at 12 noon.  Clara possesses lots of knowledge about Nazi Germany that the British would like to have, but she will not give it up until Maggie or Maggie's father  agree to visit her, something both have refused to do.  And time is running out for Clara.

Meanwhile, Churchill is fervently hoping the Americans will enter the war before it's too late for Britain to survive.  Though Roosevelt is adamant about not wanting to get involved he is willing to send help to Britain in the shape of what Churchill calls "all of their oldest destroyers, held together with tape and taffy.  They're keeping their best at Pearl Harbor…" (pg 125).

And speaking of Pearl Harbor, the Americans seem to ignore every indication they have received that an attack by Japan is imminent, despite having already cracked the Japanese code.  This was perhaps the most exciting part of the novel, reading the build up to the sneak attack on Pearl Harbor, knowing it was inevitable and reading about who knew what and what they did or didn't do with whatever knowledge they possessed.

Although I really enjoyed reading The Prime Minister's Secret Agent, it is a somewhat different novel than the previous three Maggie Hope mysteries.  As I said, the mystery was solved more easily and quickly than usual, but there is still more happening.  The focus switches from what is going on with Maggie, with Clara Hess, with Churchill, with important American officials, including J Edgar Hoover, and with important Japanese representatives and there is even a nice cameo appearance by Ian Fleming. It may sound a bit confusing, but it actually works quite well.

I have to admit that when I was reading the bits about Clara Hess, I did think to myself "oh dear, Susan has jumped the shark."  But no, I read on and it all made sense.  She is good at what she does.

While The Prime Minister's Secret Agent lacks some of the action of the previous novels, it does deal with some moral issues around fighting a clean or dirty war, particularly with regard to the idea of intelligence and whether to withhold it or share it, and the development and ethical use of chemical and biological weapons because of how they can impact innocent civilians.

MacNeal has, once again, done some great research for this novel and I urge you to read her Historical Notes at the back of the book.  There's lots of good stuff there that will enlarge on your appreciation of The Prime Minister's Secret Agent.

I think for fans of Maggie Hope, you won't be disappointed by this novel.  For those who aren't familiar with Maggie, this is a fine stand alone novel, enough background is provided so you won't feel lost or confused.  In fact, you may even be enticed to read the previous mysteries.

Here's a bit of good luck - there's another Maggie Hope Mystery in the works.