Izzy: The Christmas That Almost Wasn't by Budge Wilson 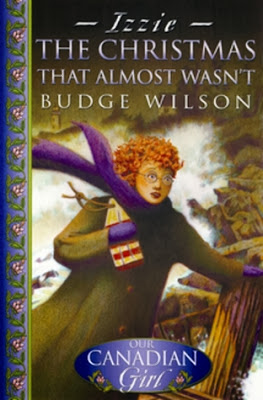 It is 1941, Canada has already been at war with Germany for two years.  In the small village of Granite Cove, Nova Scotia,  it is freezing, but today, 11 year old Isabel Piblicover, or Izzy as she is known, doesn't care.  She and her younger brother Joey are going into Halifax with their father and who knows, maybe they will be able to have a milkshake or see a movie - both such rare treats now that the war is on.  In fact, Izzie has only had one milkshake in her entire life and Joey has had none.

But Halifax proves to be a disappointment - it is crowded with people serving in the Armed Services and they always get special treatment.  The street cars, the luncheonette, the movie theater were full of men in uniform, which means no milkshake, no movie.  Still, Izzy and Joey groused about their disappointment for days, angering their dad, who had wanted to serve his country in the navy, but he had been turned down because of his age.  Nevertheless, the grousing continued.

By now, it is only a few weeks till Christmas, and to give Izzy and Joey something to take they thoughts off their disappointment and give them something to look forward to, their parents decide to let them plan the Christmas party.  How wonderful!  Izzy's grandparents are coming and so are her best friend's relatives and they will all celebrate together - a rare event with the war on.

So Izzy, Joey, and best friend Jasper set about planning the best Christmas party ever, even if they do always have to watch Jasper's little sister while they work, or find warm places to make decorations without parents around.  Slowly but surely, using imagination and innovation, it all comes together.  But so do warnings of a terrible snowstorm - predicted to be worse than any in years and years.

Izzy refuses to let that spoil things for them, but when snowflakes start falling, she begins to get worried. With good cause -  in the end, the village is covered with snow, with high drifts everywhere.  And none of the guests can make it to the party.  Is Izzy's party ruined?  It looks that way until a small boat with three sailors is spotted coming towards shore.

Can Christmas be saved?

The Christmas That Almost Wasn't is part of the Our Canadian Girl series.  It is similar to the Dear America or American Girl series; they are fictional stories about girls, and are set in different parts of Canada at different time periods.

This is the first of four books about Izzy.  It is historically accurate and quite interesting.  Budge Wilson describes the sacrifices and the make-do spirit that helped to keep people going, though I can't say my mother would have been OK when she discovered that I had dyed two good white sheets red without asking permission, as Izzy does to make tablecloths large enough to cover the tables.

Realistic details, however, always make a book interesting and The Christmas That Almost Wasn't gives us a good look at life in Canada.  I think Americans sometimes forget that Canada entered WW2 in 1939, along with England because it was part of the British Empire.  Living in a small village, Izzy experiences rationing and other wartime privations and restrictions.  She is always aware that friends have lost loved ones and others are off still fighting.  But she wouldn't have experiences the crowds of service people that she saw in Halifax.  And, like many people living along coastlines, Izzy was aware of the possibility of an invasion by the Germans, and was one of the many children who scoured the sea looking for the periscopes of Nazi submarines peeking out of the ocean.  These details of home front life in coastal Canada are what makes the book so interesting and different.

I did have a problem with Izzy and Joey being allowed to plan the Christmas party to stop their grumbling about the trip to Halifax.  It felt too much like bad behavior being rewarded.   But in all fairness, kindness and hospitality also prove to be Izzy's most valuable assets.  I did think overall that The Christmas That Almost Wasn't was a well-written, engaging book for young readers, Canadian and otherwise and a nice addition of books about Christmas on the home front.

To learn more about Izzy and her life, visit her home page HERE
Posted by Alex at 8:34 AM