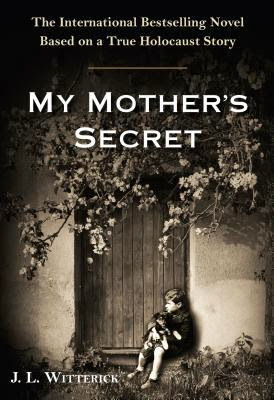 My Mother's Secret is a fictionalized version of a real Holocaust story.  It is told in five parts, by four different narrators, each telling their experience of the war.  The first narrator, Helena, introduces us to her abusive, Nazi supporting father and her kind, gentle mother, Franciszka Halamajowa.  We learn that her mother leaves her husband and returns to her native Poland with Helena and son Damian.  She has secretly saved enough money to buy a little house where she can grow vegetables and raise some chickens and pigs.  Both Damian and Helena go to work, while their mother stays home.

But soon Poland is invaded and, their town, Sokal, is taken over by Russians, as per the non-aggression Ribbentrop-Molotov Pact made between Germany and the Soviet Union in 1939.  Now, with the world at war, life becomes more difficult for everyone.

But by the end of 1940, Hitler disregards the pact and orders the German army to begin their invasion the Soviet Union.  Sokal is now occupied by German soldiers and suddenly the lives of its Jewish population are put in jeopardy.  Jews are rounded up and put in a ghetto surrounded by barbed wire.

Damian begins working for the resistance, delivering food and supplies to Jewish partisans.  Helena works as a secretary in a factory and soon, she and the factory head, Casmir, fall in love.  Franciszka has made many friends in Sokal selling her vegetables and eggs to.

But by 1943, Damian has been killed making a delivery to the partisans and Franciszka is hiding 15 people in her small house - two Jewish families and 1 German soldier incapable of killing.  Not only that, she has the guts to entertain the Nazi commander at her home with delicious home cooked German meals.  Clever Franciszka knows this will get her money to buy enough food to help feed the people she is hiding and make her neighbors think she has such good connections with the Nazis in Sokal that they will be quiet even if they suspect something is up.

My Mother's Secret is a well-written compelling story.  And it is a wonderful example of how one person can make a big difference in the world.  I really like the rotating perspectives that J.K. Witterick chose to write the book in because it gives the reader some insight into what everyone's life was like before, during and after the war and how they ended up in Franciszka's house.  Interestingly enough, however, we do not hear from Franciszka herself, perhaps because no one knows why she did what she did.  For my part, I think it is just simple human compassion.

One of the incredible things brought out in this story is that no one Franciszka is hiding knows about the other people she is hiding until they come out of their hiding places at the end of the war.

The other incredible thing is that of the 6,000 Jews who had lived in Sokal, 30 survived and 15 of them were Franciska's Jews (there is nothing about Franciszka actually hiding a German soldier).

Not surprisingly, Franciszak and Helena were named to Yad Vashem's list of The Righteous Among the Nations for what they did.

This book is recommended for readers age 13+
This book was an ARC provided by the publisher
Posted by Alex at 8:20 AM