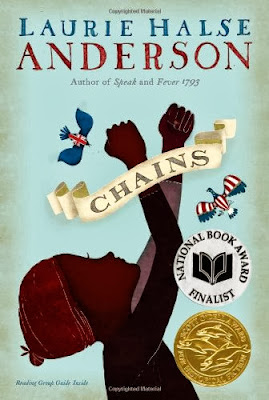 I bought Chains ages ago, but never got around to reading it.  It was actually the book that motivated me to participate in the 2013 American Revolution Reading Challenge over at War Through the Generations.  And yet, it still sat on the shelf.  So naturally, when Anna and Serena, the hosts of War Through the Generations, announced that there was going to be a Chains read-along, I jumped at the chance to sign up.  AND I AM SO GLAD I DID!  But now that I have read the book, I can't understand what took me so long.

Chains is the story of a young slave girl who yearns for freedom.  Isabel, 13, and her younger sister Ruth are quickly sold by a greedy nephew for the money they will bring after their somewhat benevolent owner, Miss Fitch, passes away.  But Miss Fitch had promised them freedom after her death and Isabel can't get that promise out of her head.

Now, as the American Revolution begins, the sisters find themselves in a Loyalist household in New York City at the mercy of a cruel mistress, Mrs. Lockton.  The Locktons, who know their bread is buttered on the side of the Loyalist and King George III, despise the Patriots who want independence from and everything they stand for.

It isn't long before Isabel meets Curzon, a slave working for the Patriots, and known for the red tricorn hat he is always seen wearing.  Curzon convinces Isabel to spy on Mr. Lockton, and report anything she hears that might be useful to the Patriots.  Isabel isn't very enthusiastic about doing this, but when she is given the devastating news that Mrs. Lockton has sold Ruth, she changes her mind.  It had just been discovered that Ruth suffers from seizures and the very ignorant, superstitious Mrs. Lockton believes that they are a sign that the devil is in Ruth.

Curson proves to be a good friend to Isabel, although she has very mixed feelings about him, the war between the Patriots and the Loyalists and which side would be most beneficial to her in terms of getting her freedom.

As the war heats up, so does Isabel's determination to find her sister and, as she is told by an elderly slave known as Grandfather, to find the way to cross her own River Jordan* to freedom.

Chains is written in the first person, so we always know exactly what is going on in Isabel's mind, how she perceives everything around her and, most poignantly, how she feels about the things that happen to her.  But by spying on Mr. Lockton and his friends, we are also given a certain amount of insight into the Loyalist side of things.

Isabel is a very strong willed girl and Mrs. Lockton knows it and is determined to break that will and so she is constantly trying to tighten the chains of slavery that bind Isabel.  Yet, it takes a while for the realization that Mrs. Lockton cannot chain her soul to really sink in to Isabel's consciousness, even though all her actions had always already proven it to be true.  Her strength in the face of Mrs. Lockton, her wavering between the Patriots and the Loyalists, her determination and her innate sense of kindness despite everything all make Isabel such an exemplary protagonist.

In fact, Anderson has created a whole cast of characters in Chains who play their parts to perfection.  Set against the backdrop of New York City,  Anderson has written a brilliantly crafted novel in which the fictional walk through the historical and it is spot on.  Anderson has even turned New York into a character in its own right, by staying true to the history of the time (NB: I used to teach New York history to my 4th graders and it was my favorite thing to teach).

One of the things I really liked about Chains were the quotes used at the beginning of each chapter.  These quotes are from actual sources of the time that help situate the reader and gives the novel a real feeling of authenticity.

I don't think I could possibly recommend this book highly enough.

Laurie Halse Anderson has excellent teaching resources for Chains, including a section on how to put on a colonial tea (with some really good recipes).  You can find it HERE

*I was talking to a friend about Chains and she said she didn't get the River Jordan reference, which is a reference to the God's command that after the death of Moses, Joshua would lead the Israelites out of slavery in Egypt to freedom in the promised land by crossing the River Jordan.