Listening for Lucca by Suzanne LaFleur 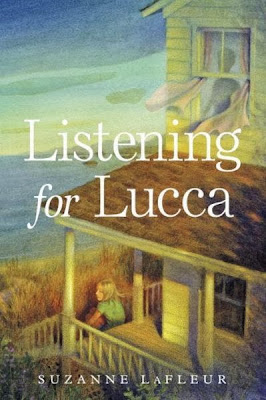 When 13 year old Siena's family moves from Brooklyn to Maine for a quieter life, they hope the move will help her 3 year old brother Lucca begin to speak again.  It isn't that he can't speak, he just stopped one day and Siena has always worried that it was her fault.

Siena also has an odd obsession - she collects abandoned things - a lost hair clip, a abandoned toy, all kinds of things that she keeps on a shelf in her room.  And she also sees things that others don't, and has some very realistic dreams.  In fact, one recurring dream takes place in a house, which turns out to be the very house her family has just moved into.  After moving in, Siena and Lucca immediately sense that the house has a haunted feeling.

Siena finds an old abandoned pen while fixing up her room with the initials SEA.  After putting in some ink, Siena tests out the pen and uncontrollably begins to write My name is Sara Elizabeth Alberdine in a completely different handwriting.

And it doesn't take long after finding the pen for Siena to start have dreams about a boy fighting in World War II.   She soon learns that the boy is Joshua Alberdine, older brother to Sara.  Sara is rather young and pushed around by their rather mean cousin Jezzie.  When Sara catches Jezzie stealing money from her mother's purse, Jezzie takes Sara to the ocean, tells her she can not speak again if she wants her brother Joshua to be safe and come home.  She takes a key, turns it and Sara immediately stops speaking.

The pen which only writes Sara's thoughts gives Siena hope that if she can find out what happened to Sara, Joshua and Jezzie, she might be able to help her brother speak again.  But when Joshua comes home suffering from a rather serious case of PTSD, finding the answer may be harder than Siena thought.  How can she possible go back in time to reach out to Joshua?

Listening for Lucca did hold my attention throughout the novel, but in the end, I was somewhat disappointed with it.  The writing was fine, the characters were well-drawn, and for the most part the action, though a little slow, was good.  Yet, in the end, I realized I had some big problems with the story.

But for some reason, I never really got the sense place, of the Maine seacoast and the town that the family moved to, of what should be a wonderful old Victorian house, so I don't feel like I really ever situated them, not in the house, not outside the house.  Maine is such a wonderfully descriptive place that it was too bad it didn't get play a bigger part.  Nor did I get a sense of where Joshua was fighting in WWII.

Joshua came back from the war in pretty bad shape emotionally and mentally.  He basically took to his bed, a shell of the fun-loving person he had been before the war.  And while they didn't call it PTSD back then, combat stress was still recognized as a serious problem.  I am afraid Joshua's recovery was just too pat and trivialized his whole experience.  Yes, he loved his sister, but one just doesn't snap out of a serious trauma the way he did.

The ending - just too pat, too easy.

Most of Listening for Lucca was OK, so I wouldn't not recommend it.  It will, undoubtedly, have a great deal of appeal to lots of middle grade readers, especially since there is the hint of a budding romance in Siena's very near future.