Warriors in the Crossfire by Nancy Bo Flood 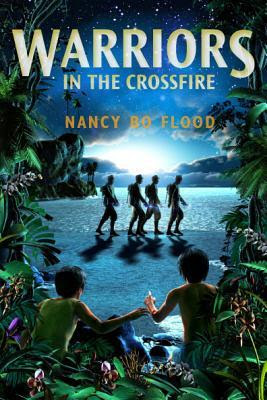 Twelve year old Joseph. son of a Saipan chief and clan leader, and his Japanese cousin Kento Tanaka  have always been friends and now they both want to become warriors.  But Saipan has been occupied by the Japanese for the past 25 years and becoming warriors has been forbidden.

Up til now, World War II hasn't had much of an impact on life on Saipan, but one day at the Japanese school the boys attend, they are sent home by their teacher with words of warning to obey.  As the Americans get closer, the Japanese need more soldiers, Kento explains to Joseph, so the school was close and the older boys will become soldiers.

Joseph and Kento don't see each other very much now, when they do meet, Kento tells hims more soldiers have arrived on the island, that the war is coming closer.  Then Joseph's father tells him to trust no one who isn't family, not even Kento.  Later, Ako, Kento's younger sister, tells Joseph not to go to the cave when war comes.  But what cave is she talking about?

One night, before he reports for mandatory work at the airstrip used by the Japanese, Joseph's father wakes him and takes him to the cave where he has stored water and food for the family's survival when the war comes to the island.

Soon, the bombing starts and Joseph thinks of all his has been told to do.  It is a confusing time for a 12 year old who is now responsible for the safety of his mother, pregnant sister, and nephew.  Once again, Kento and Ako beg Joseph to not go to the caves, but to come with them.  But Joseph takes his family to the caves anyway.   But when the family needs more water, Joseph risks going to the grotto to get it, and instead meets Kento, who asks for his help.  The Japanese are losing the war and the soldiers are forcing all Japanese citizens on Saipan to honor the code of the samurai - defeat, dishonor, death.  Ako and her mother have been forced to go to the cliffs, "the precipice that plunged straight down, the place of lost spirits, of a moaning wind that never stopped" where they along with the other Japanese were expected to jump to their death, according to Emperor Hirohito's directive.  Joseph remembered these cliffs - his father had taken him there once and told him never to go there again.

Would Joseph and Kento get there in time to save Ako and her mother?  Or would the American soldiers in the helicopters over them kill everyone first, just as the Japanese always said they would?

Warriors in the Crossfire is a small but powerful book, one that made quit an impression on me.  I had never read a book for young readers about the impact that the fighting between the Americans and the Japanese had on the indigenous people or the innocent Japanese civilians living on Saipan.  Saipan is a small island but was strategically important militarily for both nations in WWII.   One of the effects of war, in general and WWII specifically because it was a total war, is that the people most frequently caught in the crossfire are the innocents - those people not engaged in warfare, and especially the children and that is exactly what happens in this well-written, well-researched book.

This is a true coming of age story for both Joseph and Kento.  At the beginning, both boys think they know what it means to be a warrior and that is what they want to become.  But in the end, caught in the crossfire of warring nations, the boys learn that being a warrior, a true warrior turns out to be something very different than what they had thought.

Flood gives the reader a wonderful insider's view of the rich culture of the island's indigenous people despite living under Japanese occupation for so many years.  But there is also Japanese culture on the island and Flood gives a nod to that as well by introducing each chapter with a Japanese Haiku, for example (and my favorite)


TO SEE, PEACE
After darkness We seeWhat had been Un-seeable.

These are the cliffs that Joseph's father took him to and told him to never return there again.  And these are the same cliffs were Japanese soldiers forced Japanese civilians to honor the code of the samurai. 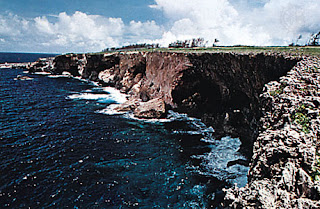