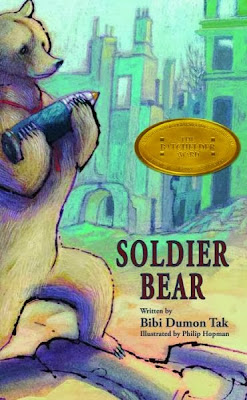 When a group of five Polish men end up together in British army base in Iran after being released from a Russian prison in 1942, they quickly become part of the 22nd Transport Company.  One of their assignment is the task of transporting large amounts of artillery ammunition from Iran to a larger British base in Palestine.  On their very first trip, they encounter a young boy en route dragging a large moving sack.  Inside is a small baby bear, a Syrian brown bear whose mother either abandoned it or had died.  The five softhearted Polish friends decide to trade some objects for the bear, and before long, they even decide to keep the baby bear, no matter what their superiors at the base say.  And so they name the bear Voytek, Polish for smiling warrior.

Perhaps because there is a war on, but things are a little loosey-gooset at the base and the men are actually permitted to keep their new baby bear, feeding it condensed milk in an empty vodka.   And it doesn't take long for the Voytek to become part of army life in the desert.  He haunts the cook for scraps, uses all the shower water to cool down and becomes best friends with an unnamed stray dalmatian, and enemies with a monkey named Kaska, who delights in tormenting Voytek at every opportunity and who rides around the base on a large dog named Stalin.

As the war goes on, the Polish soldiers are eventually given orders to sail for Italy after the Allied soldiers have successfully been able to push back the Germans.  And yes, because Voytek was officially listed as Private Voytek, he was allowed to go along.  In fact, the whole menagerie is allowed to board ship and travel to Rome, though Voytek wasn't too fond of sailing.

Voytek was a strong, sometimes goofy bear who seems to think loading and unloading heavy artillery ammo is some kind of game with the men.  Imagine a bear carrying a bomb that could blow up the whole army base if dropped, but the men and even the brass has faith in Voytek's ability to safely transport deadly ammunition.

I often found myself laughing out loud while I was reading Soldier Bear.  There was something in the writing style and the antics of the animals reminded me so much of Roald Dahl's WW2 book Going Solo.  Voytek was definitely a bear with his own personality who seemed to believe he was just "one of the guys" which may explain his penchant for beer and cigarettes.  Of course, part of what makes this story so charming is that most of the time the soldiers are based in the Middle East, which did not see the kind of fighting that was happening in Europe.  It was a much more relaxed setting and really allowed for the antics of people, bears, dogs and even the monkey Kaska more easily.

Soldier Bear is an absolutely delightful fictionalized account of the soldierly life of the real Voytek and made even more delightful because of the wonderfully whimsical illustrations of Philip Hopman, a Dutch artist, on the cover and throughout the book.

I loved this book and even though Voytek was a beer-drinking smoker, would not hesitate to recommend it to Middle Grade readers.  I think that they will be able see that the fact that Voytek was such a good friend and that he made the war easier for everyone he came in contact with, especially this five Polish fathers, is the more important aspect of this story.

There are a number of short videos online about Voytek like this one that you can find at YouTube: