Sadako and the Thousand Paper Cranes by Eleanor Coerr 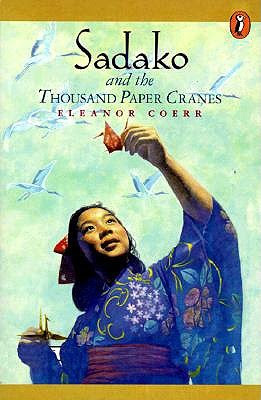 It was Peace Day, August 6, 1954 and 12 year old Sadako Sasaki couldn't wait for the day to begin.  Sadako loved Peace Day - the crowds, the fireworks and, especially the cotton candy.   Sadako knew it was going to be a good day because she saw nothing less than a good luck sign in the bright blue sky over Hiroshima that day.

Still, her parents had to remind Sadako that Peace Day was a solemn occasion, a day for remembering that the first atomic bomb ever used - the Thunderbolt - was dropped on Hiroshima by the United States in an effort to end the World War II and for honoring the many, many lives lost because of it.  But Sadako, who was 2 years old at the time the bomb hit Hiroshima, considered herself lucky to have  survived the it without a scratch and avoiding its after effects, the dreaded A-Bomb disease.  Sadako and her best friend, Chizuko, spent a wonderful Peace Day together.

But then, in the fall, Sadako began to feel strange and dizzy.  Although the feeling came and went, Sadako decided to keep it to herself.  After all, she was a really fast runner and had just been chosen to run the relay race in school.  Nothing could spoil that.   Sadako did manage to keep the dizziness secret for a few months, until February 1955 when she collapsed while running in school.

Taken to the hospital, Sadako and her family learned that she did, indeed, have the A-bomb disease - Leukemia.  Now confined to a hospital bed, her friend Chizuko came to visit one day and brought Sadako a beautiful golden origami crane, along with some paper and scissors.

Chizuko reminded Sadako of the legend of the crane - if a sick person folds one thousand paper cranes,  the gods will grant their wish and make them healthy again.  That very night, Sadako begin folding cranes.

But folding one thousand cranes is a big job, especially when you are ill.  Sadako didn't finish folding all the cranes before she passed away on October 25, 1955.  But, according to Eleanor Coerr in her Epilogue, Sadako's classmates finished folding the rest of the cranes for Sadako.

Sadako and the Thousand Paper Cranes is a emotionally, powerful story.  It is a perfect book for introducing this difficult topic to young readers.  There are no detailed graphic images described about the war, the bomb or even to after effects, only an acknowledgement of these things.  There is some controversy over whether or not Sadako actually did finish folding 1,000 cranes.  Regardless of whether she did or didn't, there is much to be learned from Sadako's story.

After her death, schoolchildren all over Japan helped raise money to erect a statue honoring Sadako Sasaki and in 1958, as statue was unveiled.  Since then, school children from around the world have been mailing or carrying folded paper cranes to the Hiroshima Peace Memorial Park by the thousands to honor Sadako and the many people who perished as a result of the A-Bomb with pledges of peace.

The Children's Peace Station Hiroshima has a virtual museum that you can visit online and learn all about Sadako's life and her paper cranes for peace.

Origami-fun is just one of many online sources where you can learn how to fold a paper crane.

Global Ministries also has instructions for folding paper cranes as well as the address for sending your peace cranes to the Children's Monument in Hiroshima's Peace Park.